Today, Nicaragua’s youth are fighting against a dictatorship with the same patriotism youth did yesterday [in the 1970s against Somoza]

HAVANA TIMES — The Right is a political label which, like the Left, emerged during the 1789 French Revolution’s political and social conflicts, as a result of where these movements were fortuitously sat in the National Constitutive Assembly: the Mountaineers (revolutionaries) on the left and the Girondins (conservatives) on the right.

Right, and Left, aren’t concrete concepts and they don’t have any shape or form; rather they are unreal, simple words – a (fictitious) fantasy which is used arbitrarily and conventionally to discredit something or someone when there is a political interest at stake and they don’t share the same political affiliations.

The Right is divided into many different movements, just like the Left is, and there isn’t the slightest bit of homogeneity among them but a thousand groups of every political nuance, size and class under the sun; because a poor worker, the victim of political alienation, can have conservative opinions and actions, while a rich person can have socialist ideas, the product of a humanist ideological education.

The Right, and Left, don’t have a nationality or geographic location and the use of these terms in serious political discourse is becoming less and less useful. However, they remain in our common language just like the slang term “son of a bitch” does when you want to insult someone; although after being used so many times, it’s almost lost its ability to anger someone.

However, from what we have heard about the Right from Daniel Ortega’s government officials, which their media parrots are repeating during the current political crisis, it is being given the highest lottery prize: the Right has been granted authorship of the revolution of conscience which the student and working youth have led since April 18th this year.

Our country’s Right, or rather its leadership, has historically lacked its own political initiatives (Washington used to supply them with their initiatives) and it has small political parties, it has no popular support, yet Orteguismo is giving it “super powers”, as if they were the Yankee dolls Superman and Batman.

They see it as what is leading thousands of students from every university, ordering millions of countrymen to take to the street, all over Nicaragua, in order to protest against the government’s crimes and violence, demanding justice and for those responsible for this violence and crimes against humanity to leave office.

The Right has been given so many abilities to influence and order an entire population to demand a peaceful life and democracy in Cuba (which, we already have enough of according to Mother Rosario’s preachings) that even the CIA must be surprised, or jealous, of what the national Right is capable of doing, even when they haven’t organized it, like they used to during Reagan’s presidency.

Plus, Nicaraguans make up the Right, the Left and the Center so there isn’t any reason to suppose that they should stand on the sidelines of the tragedy which we are all experiencing because of oppressive and dishonest rulers, who don’t have any flags but their ambitions, even though they take shelter under the Left’s flag.

The CIA must be analyzing the reason why there are such large popular mobilizations (which have been taking place every day for over a month) throughout the nation and be just as surprised when they hear the same slogans which were shouted during the revolts against their godson Somoza, like: “Let your mother surrender!” (Sandinista poet Leonel Rugama cried out when the Somoza Guard asked him to surrender), “The people united will never be defeated)”… And this other one: “Free Homeland and life!” a humanist paraphrasing of the slogan “Free Homeland or death!”

Intelectuals in some Leftist groups who have announced their defense for Daniel Ortega worldwide, should ask themselves (like the CIA should be asking themselves): why are these popular marches also enlivened with the same music and songs as the protests during the revolt against the Somoza dictatorship?

Sure enough, they’d realize that those battle hymns of the revolutionary people which are sung and inspired by brothers Carlos and Luis Enrique Mejia Godoy, by Venezuela’s Los Guaraguao, Chilean Inti Illimani and the Argentinian Mercedes Sosa, are the same ones which are sung on Nicaragua’s streets 40 years later, because today, Nicaragua’s youth are fighting against a dictatorship with the same patriotism national youth did yesterday!

Another detail: if this unarmed uprising of conscience of the entire population didn’t have a patriotic, just and democratic objective, then the same Mejia Godoys and other singer-songwriters wouldn’t be creating new songs (like they are now) inspired by and dedicated to the young people murdered by Ortega’s paramilitary forces. Likewise Rappers are standing with this popular struggle.

In the face of this situation, both CIA magicians, who conjure up counter-revolutionary situations, as well as wise men from the Left of mechanical thought, can reach the conclusions they want to about what is happening in Nicaragua, like they always do, but they will never reach a conclusion that hits the nail on the head like Nicaraguan Felix Maradiaga Blandon’s (*) does:

“I believe that the Nicaraguan youth are the revolution’s daughter. Some of us are the Revolution’s children in a more painful way. We see her as something that was betrayed, others are more proud, but we are (all) children of a revolutionary process and that is ingrained in the collective mindset of the new generations. It’s a generation which grew up seeing the Revolution as a historic moment, like youth: the youth of their parents and grandparents who didn’t put up with a dictatorship and that is where the (Ortega) regime made a mistake, thinking that this rebellious free spirit had become a spirit that could be controlled with incentives; (and that) this rebellious spirit resides in the young men and women who were the ones who made us want to follow behind them.” (Director of Nicaragua’s Institute of Public Policy and Strategic Studies, interviewed on Sunday, La Prensa, 20/05/2018) 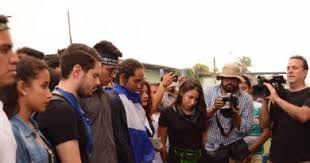 These truths, born within different social groups, gives us the chance to build a democratic post-Ortega State. The thing here is that national opposition parties (from any movement) lack the ability to summon the population by themselves, exclusively. And today’s popular uprising involves every political movement, including the Sandinista movement which broke away from Orteguismo’s corruption, but they weren’t the driving force.

The country’s youth has created their own leaders and the population has recognized their leadership. With their support, they have created the Civic Alliance for Justice and Democracy. However, according to Ortega and his media, they form part of the “evil Right”; but since this “Right” is putting up the dead, what side are the people shooting at them from?

A simple answer would be to say that they are being shot at from the Ortega “Left”, but Ortega’s actions and that of his paramilitary forces don’t resemble any Leftist concept or movement… because they are a tropical, fascist mafia!

Sooner or later, the outcome of this crisis will be a democratic society and I hope we never have to face the dictatorial rule of another opportunist ever again. The healthy youth movements inspired by the revolution (who are inspiring another kind of revolution with their struggle) will be the guarantee of this democracy, free of having to make compromises and bowing down to anybody.