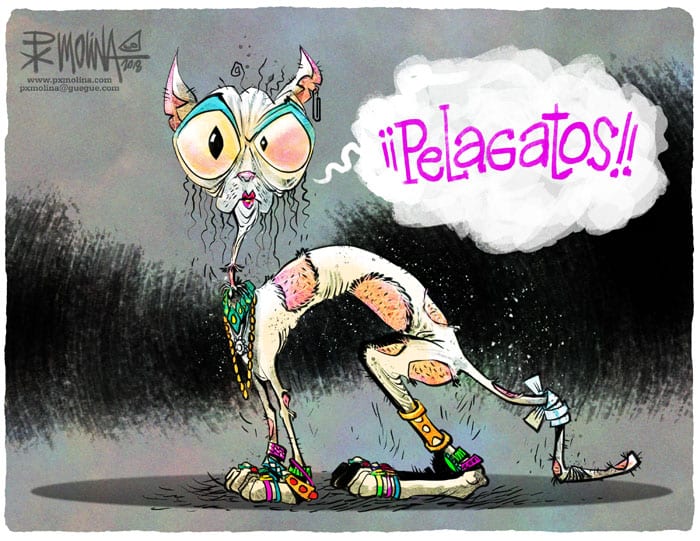 The co-dictator’s daily “homilies” manipulate the religious symbols and values, mixed with insults full of hate aimed at her critics.

HAVANA TIMES – No one here in Nicaragua is unaware of the pseudo-mystical treatises of co-dictator Rosario Murillo, occurring at the margins of the political and ideological battles in the media and amid the dictatorship’s repressive actions with all their dark consequences.  This discourse reflects her intention to elevate herself into a personal spokesperson for the divinities and to present her regime as the representatives of God’s will in Nicaragua.

Rosario’s sermons are mocked by political figures from the independent opposition, or are looked upon as nothing but irrational discourse, far distant from our political reality, as well as cruel hypocrisy that she preaches “love and faith”, while her guards repress the population with no scruples.

There’s a lot of truth in these interpretations of Rosario’s discourse. However, even though the majority view it as nothing more than an eccentricity, in reality it’s more than that. Her sermons with their mix of hatred and pseudo-religion have a corrosive effect on the consciences of some of the backward sectors of the population. The speeches have transformed some of them into fanatics, among them police and paramilitary.

There are many testimonies, some from victims, of how the fanaticized police and paramilitaries look upon and mistreat any critic of the government.  They seem to view them as their personal mortal enemies, or as heretics of their Ortega “religion” that deserve to be besieged, jailed, tortured, or even killed.

Recently, we’ve seen two terrible examples of that fanaticism: on Wednesday, December 5th, two days after Daniel Ortega called the bishops “terrorists” and “criminals”, a guy identified as Ramon Mercedes Cabrera, a Sandinista “to the balls”, posted a video threatening Cardinal Leopoldo Brenes, journalist Miguel Mora and Catholics in general, with death.  At the same time, he declared himself capable of “knocking [anyone’s] head off with bullets”. On Thursday, December 6th, a woman supposedly of Russia origin, threw sulfuric acid on Father Mario Guevara, yelling as she was captured that she’s not afraid of being handed over to the Police, because they would do “nothing” to her.

Together with the political hatred cultivated by the Ortega government spokeswoman, the false “religious” motive provides yet another motive for this aggressive and criminal behavior towards all critics, since their fanatical henchmen believe that criticism and truthful information profanes the truth of the living gods in their sanctuary at the El Carmen bunker.

These fanatics express adoration for Ortega and Murillo and their gazes grow tender when they view them. Seeing them as icons of their “church”, they await a “miracle” from their “sublime” words.

Active zealotry, to say the least, from which anything can be expected. The combination of political and religious fanaticism can supplant the normal human and social activities of the fanatic with violent actions, as has been seen daily during these eight months of human rights violations.

All of this has had another inadvertent effect on the psyche of society. Even public figures have found themselves impelled to counteract Murillo’s hate-religious homilies with their own religious discourse.

I’m not referring here to the Catholic priests, who are within their rights and duty to predicate according to their pastoral functions, but to politicians and journalists who – although they’re lay figures – still fall back on Biblical phrases for everything.  Their reasoning seems to be: if the preaching of the dictator is a manipulation of our faith (which, effectively, it is) my conscience as a sincere Christian impels me to use Biblical phrases to counteract her hypocrisy.

Thus, between sermons and counter-sermons, the country’s political struggle could deteriorate into an absurd “religious war”. If that really came to be, it would generate social consequences as severe as those caused by politico-military wars.

I’m thinking about the terrible experiences of the “religious” wars that bathed nearly the entire world in blood: destruction of buildings (like the Twin Towers in New York), causing the deaths of thousands of innocents, and great damage to material and cultural goods. Such conflicts also endanger internal stability and menace the relative peace in the world.

The combination of religious and political fanaticism has fed terrorism. Islam was previously manipulated until it was deformed, and many of its followers have sunk into terrorism, believing that to die while killing “for the glory of Allah” is their path to paradise.

But it’s also true that – long before this – the colonial powers looted the natural resources of the backwards countries, as well as looting the consciences of the people who were poisoned with the idea of a war for a God who was different and better than their poor deities.

Later, that degenerated into the raging geopolitics of wars against the “backwards cultures” on the part of the civilizing “Western and Christian culture” of the great powers. All this gave life and motivation to Islamic terrorism.

In our country, that’s what happened, although the terrorism was applied by the inquisitors. The colonial phenomenon was overcome centuries ago, although our ancestors lost that “religious” war and it doesn’t appear probable that it will be repeated, since the schemes motivating the ideological war in the current world are very different. That’s why the current phenomena is something we should be concerned about.

Perhaps none of us have considered the magnitude of the discord that could be provoked by the phenomenon of religious manipulation, because the “religious” speech on television and radio still seems to be of a superficial and innocent nature.

But the co-dictator, with her daily “homilies” manipulates symbols and religious values mixed with insults full of hatred aimed at her critics, demonstrating that her sermon isn’t a sincere profession of faith, but a resource to defend her economic interests and cover up her repressive policies.

On the opposing side, people tied to the media, or with access to it, are utilizing their own religious discourse as a defensive policy in the face of the daily, generalized repression from the government police and paramilitary.

For example, when a television host dedicates part of his news program, to interviews or commentaries that preach to the television audience that they should have faith, because the victory against the oppressors is coming soon and “it’s in the hands of God,” their sincerity is beyond question and they are within their rights to believe this.

However – How can we avoid the passivity that can result from such preaching among a defenseless population who must go about their daily lives under the weight of terror, pressure, and threats against their liberty and their life?

Faith, beliefs, are a given part of our intimate personal life that the co-dictator fails to respect with her crude political manipulation of religion.

Why, then, should we try to counteract their political speech disguised as religion with more religious discourse, instead of combatting that religious manipulation with an open political discourse?

In the end, the essence of the struggle is political. Falling into the dictator’s game doesn’t help either religion or the political struggle. Instead, it contributes to confusing people who need orientation to be able to fulfill their historic task of putting an end to the dictatorship and conquering their freedom, social justice, and democracy.

When that is possible, all religion will be respected as an individual right to practice one’s religion freely, and not have it imposed or manipulated via the communications media.