“Without the information to start a public debate, we’re lost.” (Edward J. Snowden)

HAVANA TIMES — Oliver Stone will present “Snowden” at the Havana Film Festival to take place in Havana from December 8th-18th.

The movie focuses on an extended conversation between Corvin, a veteran CIA agent and Internet expert and the super hacker Edward Joseph Snowden. Reading through this script carefully implies a difficult message for a Cuban audience to take in because of the authority-bureaucracy combination we have in this country determining censorship.

“When those in power try to hide by classifying everything, we will call them out on it. And when they try to scare us into sacrificing our basic human rights, we won’t be intimidated, and we won’t give up, and we will not be silenced.”

Although the movie directly points out the United States, where a long tradition of respecting individuality is put into question by the massive illegal interference by government intelligence agencies, the reality is that the quoted 3 billion messages that are checked in the US are not an individual case, as the Cuban website 14 y Medio recently reported:

“In July 2014, Governments in Cuba and China signed a “cyberspace cooperation” agreement.” The Asian country has passed on some of its experience in surveillance and blocking web content to the island, especially what they learned after they put the Golden Shield Project into action in 1998, which is more famously known worldwide as the Great Firewall of China, which employs over 30,000 censors.” (03/09/2016)

The government is supported by fact-based evidence that come from words that serve as a filter, this technique is similar to the one used in the film: “It´s like a Google search, but we see everything: emails, chats, facebook, everything.”

There are filter words and phrases that are being checked in Cuba: Guillermo Farinas, hunger strike, Castro, human rights, Cubanet, Diario de Cuba…

The worst thing isn’t this interference that the bureaucracy-government pair carries out, but that they do so without appealing to any kind of law, outside of any court decision. In Cuba, when it comes to matters connected to its misinterpreted politics, judges don’t judge. Eleven million people are left to be judged by a handful of government officials.

Why is the Cuban government welcoming Stone and allowing this film to be shown?

It’s about a tiny risk they run in exchange for presenting a democratic and tolerant image, which is especially directed at people abroad, supported by the film director’s fame who has also made two feature documentaries about the Comandante, which by the way, have not been shown across our country. 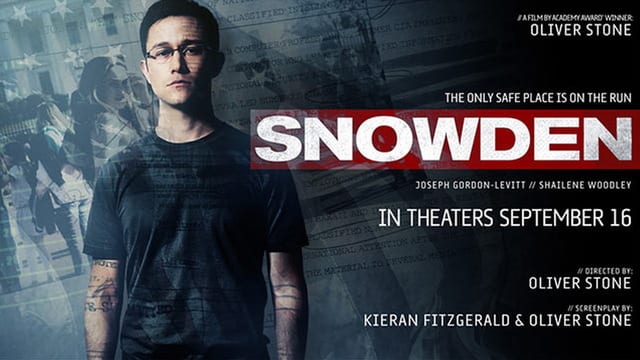 First of all, the movie Snowden is 2 hours and 10 minutes long, with a special focus on documents, little action, factors which won’t attract 90% of the Cuban people, who are too engrossed in their daily battle for survival. In this case, soap operas on Spanish-speaking channels come first along with “action flicks”.

When checking out ten places where private people offer the “Weekly Package” of pirated audio visuals, only one of them – in the Fin de Siglo market on San Rafael Boulevard- had Oscar award winning films from recent years. It isn’t long now until this dense feature film we’ve been talking about comes here to Cuba. There is no risk of “contamination” for video customers.

The young neighbor who me a AVI version of this film warned: “Dude, this is heavy stuff, I don’t have the patience to sit down and watch it, it’s trying to pay too much attention to what they’re saying for a long time because otherwise you get lost and won’t understand anything.”

Secondly, “Snowden” might be publicly screened one day, with a claque of journalists and intellectuals who have been previously invited and viewers who were able to get a ticket that day.

Third of all, the myth of privacy is a US matter, in our country, we live under constant surveillance ever since the Committees for the Defense of the Revolution (CDR) were founded in 1960. We know we are being controlled without a right of reply and they have instilled the objective that Stone puts into the mouth of the CIA trainer:

“Most people don’t want freedom…they want security.” Secrecy becomes the path to “victory” in the face of the country´s enemies. However, Snowden´s screenwriter offers us another take: “You “don’t have to agree with your politicians to be a patriot.”

In the face of the challenge we currently face, the words of Julian Assange’s main team player:

“The greatest freedom that I’ve gained is the fact that I no longer have to worry about what happens tomorrow, because I’m happy with what I’ve done today.”

7 thoughts on “Oliver Stone’s “Snowden” as Related to Cuba”