Democratizing Cuban society is an imperative of the present stage of the revolutionary process.

HAVANA TIMES — Part of the analysis publically presented by several supporters of the “Participatory and Democratic Socialism” platform dealt with the need to democratize the political-electoral system in Cuban society. In the document “An Affirmative Action for Democratization,” three key elements were raised with which many Cubans agree. One of them is the need for elections of the country’s president and vice president by secret ballot and direct vote.

What importance does this have in the particular historical context of current Cuba?

There may be other opinions, since some people will probably disagree and have their own arguments. All of those are fine and welcome, provided they’re expressed on rational foundations and with respect.

For Cubans, the figure of the leader has always been very important. One can recall the problems of leadership in the wars of 1868 and 1895, and that the civil wars in the twentieth century were associated with attempts by leaders to remain in power and a lack of democratic mechanisms to channel discontent.

Today this is a fairly widespread demand that any attempt at democratization in Cuba should consider. Although these mechanisms don’t exist in the constitution, the direct election by universal suffrage of the president and vice president, as well as the governors of the provinces and mayors of municipalities, would make those who take office feel committed and responsive to the interests of the majority who elected them.

In Cuba we have a political system that is parliamentary in theory but which in practice has been more presidential than the bourgeois-democratic models of this type.

The truth is that while Fidel Castro was president, he was the one who made all the important decisions (though at one time the so-called “workers’ parliaments” were consulted or those people present in a rally at Revolution Square would be asked to vote by show of hands).

Now his brother Raul is taking into account what Fidel thinks, as well as what the circle of generals around him believe, and he also raises questions to the rank-and-file membership of the party, the workers and the people. Nonetheless, his government has worked primarily on the basis of executive orders – albeit with some participation, especially with final approvals by parliament.

However, the parliament, in truth, decides very little and continues to be elected according to an electoral system that guarantees the election of deputies that are desired and proposed from above through nomination committees controlled by the party at all levels. It is this parliament that elects the president and vice president.

Our “parliamentary” system is actually the same as what existed under failed “real socialism” – in the so-called “people’s democracies” and the “state of all the people” in the USSR.

In no way does this resemble traditional European parliamentary models, as some claim, where there’s free competition of political parties in elections, freedom of expression and association, parliamentarians who do not respond to a single political line, and where they assemble almost continuously to discuss and vote on the laws.

We Cubans are not Europeans, though much of our roots are found there. We are Americans, and in these lands — from the Great Lakes to the Patagonia — our independence struggles produced the presidential systems that are now in place in most of the ALBA countries.

This is part of the tradition of the early Mambi independence fighters and their later constitutions, except for the last one in 1976, which (without it being openly expressed) was designed so that much of the decision-making power would be concentrated in the presidency.

Politically we are more North American than European. Our nations emerged from independence wars against metropolises controlled by royalties rather than evolving into parliamentary systems (a kind of metamorphosis of the legislatures that didn’t exist in America).

Of course these presidential systems involved the caudillo or the strongman tradition of our region. In Cuba, possibly no one could have ever disputed Fidel Castro holding the presidency, but now that he has retired from an active role in politics, the situation has changed radically.

While Raul is highly respected and liked within the major institutions of real power in Cuba — the military and the Ministry of the Interior, which was (literally) occupied by the Revolutionary armed forced (FAR) in 1989 — he doesn’t have the qualities of his brother.

Also, Raul’s popularity has not been helped by his continued attachment to the style, methods and personnel of the military even after his having become president.

He does not appear nor is he seen as the president of all Cubans, but as the general who is also the president and who favors his military role over his civil and political ones. 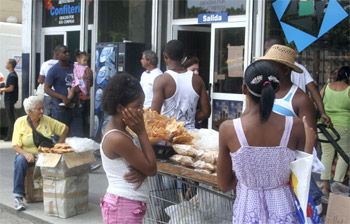 Military leaders now receive the perks and higher nominal and real wages than ever before. The generals are appointed to serve as ministers. They direct the economy and are placed in executive position over business concerns and major economic projects.

The generals are trying to impose their methods of discipline in business and are attempting to run the economy based on issuing “orders.” The hard-currency economy is controlled almost entirely by FAR. People say that Cuba is militarized, and I think this is true.

The presence of many ex-guerrillas in the institutions of the government, the state and the party made sense in the early years of the revolution. But 53 years later, should these same military leaders who battled against Batista and who are now in their 70s and 80s play that same role? No.

In any case, Raul maintains his historical legitimacy for having always been second to Fidel, but people don’t see him the same as the so-called historical “others.” And what if Raul — who’s not a young man any more — is so unfortunate as to become ill and pass on without having democratized the country?

Raul himself was very clear when he said that without Fidel in the highest office, things couldn’t remain the same, that Fidel could only be replaced by the whole party.

The practice of this over these past six years has shown him to have been correct: none of those senior leaders have shown the ability to assume the role of Fidel, but they have also acted as if they have the support of the entire party.

They have continued running the party, the government and the state like a private agency of the established leadership and not of the members, the workers and the people, as it’s supposed to be.

They have asked for opinions, yes: at the appropriate place, time and setting as understood be the leadership, but without horizontality, without discussions that are open to everyone, with a press that still satisfies interests determined by the Ideological Department of the Central Committee, with the provinces and municipalities directed by the party and with government proposals always coming from above through cooptation and deciding everything in the narrow niches of the Politburo, making reforms in accordance with the views of a narrow group.

The stepping down by Fidel was an opportunity for the necessary democratization of the political system, agreed to by the Communist Party itself; but in practice there have been no democratizing changes, not even formal ones if you will. Everything still works just like it was conceived in the era of Fidel, when he was undisputedly supported by the majority.

The dangers of division always come from a lack of avenues for democratic participation.

The times are not the same in Cuba or in the world. Fidel — the historic leader of the revolution, who had billions of dollars in financial support from the USSR and the “socialist camp,” and was backed politically and militarily by that world power — was a situation very different from the current government of his brother – who is not the historic leader and who inherited a country in crisis and without the support previously provided.

In his speeches, Raul himself has called for greater democracy for the party and society. But his words haven’t been matched in practice. The country continues in a direction of hyper-centralized economics and politics. The party and society continue without democratization.

7 thoughts on “On Cuban Elections by Universal Suffrage”