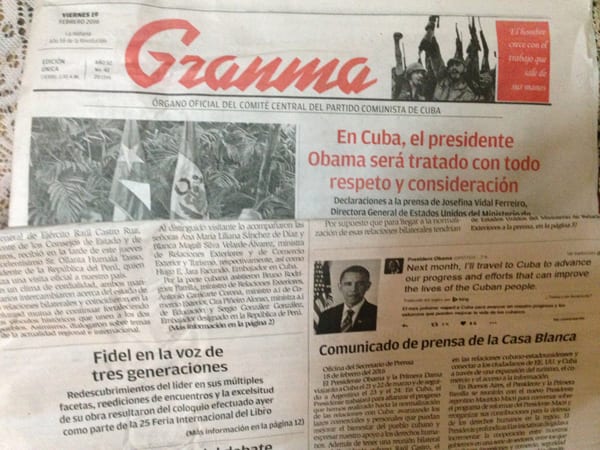 HAVANA TIMES – The time has come. It has been over 80 years since a president of the United States has stepped foot on Cuban soil and, in a decision that to many appears to have been made over night, President Obama and the First Lady Michelle have officially announced a visit to the island next month on March 21-22.

Here on the island, the news leaked in the predictably measured way that all news leaks in Cuba. It was first transmitted via Telesur late on Wednesday night with no previous mention on the Cuban evening news broadcast. Silence followed the next couple of days with many Cubans out of the loop about the imminent visit. Two days later, the confirmation was printed on the front page of Granma accompanied by the headline “In Cuba, President Obama will be treated with respect and consideration.”

According to the official statement of Obama’s twitter account, the objective of this brief visit is to “advance our progress and efforts that can improve the lives of the Cuban people”. Granma’s stance focuses on the importance of improving bilateral relations and to give President Obama an opportunity to “appreciate the Cuban reality”. Granma further stresses that issues such as the embargo and the United States occupation of the territory comprising the Guantanamo Naval Base will remain on Cuba’s agenda. Obama’s priorities, on the other hand, will center on human rights.

The decision is logical and comes to many as no surprise. Fourteen months ago, a new era of diplomatic relations between the two nations was announced to the world. The process of normalization, welcomed by both national and international media as a mark in a new chapter of politics in the region, in reality, has plodded on at a more than gradual pace. It has been viewed by many Cubans as another example of politicians paying lip service to reform with very little effect. Embassies have opened, flights have set off, certain bans have been lifted and life has continued as normal. However, undeniably, things have now begun to accelerate.

Just as with the recent visit of Partriarch Kirill and Pope Francisco, a making-history moment that on the streets of Havana went fairly unrecognised, it is clear that, amongst other motives, the Cuban government is mobilizing itself. The reunion of two of the most important figures of the Christian world resonated both symbolically and politically before an international audience.

But for the Cuban people what real resonation will Obama’s visit have? How will Cubans react?

When asked, responses and opinions are, on the whole, positive towards recent events but tainted with a mixture of expectation and apprehension. As a source stated this morning “It’s hard to take in at times. When you have lived your whole life being taught one thing, the Americans are the enemies, don’t study English, don’t travel and the omelette is suddenly flipped, you start to believe that everything is built on a lie”.

Another source said, “I’m not really interested in why Obama is coming but rather in how will people view the visit…how people will receive him. Obama represents a lot for the Cuban people, as he is also our President. He governs the largest community of Cubans living outside of Cuba.”

The Obamas will be greeted with hope and relief as the visit symbolizes for the Cuban people that real changes are on the horizon, a fortified connection between the two largest communities of Cubans in the world, and most importantly a point of no return for future candidates for the US presidency.

But will the world witness a tipping point moment?

It is too early to say. What remains certain is that Obama’s visit will continue to be the topic of conversation over the next four weeks – on Cuban television, international television, the streets of Havana and Miami, and the President will be greeted in March with expectation, flags and baited breath.