HAVANA TIMES – I have the impression that it won’t be long before there’s a new rise in the price of public transportation in Havana.

The formal price of a ticket on the urban buses is 40 cents (of a peso), in the so-called national currency.  Given the equivalent in US money – about 2 cents – this price may seem infinitesimally small, until you also look at the dollar value of what a Cuban worker receives as a salary: about 20 dollars monthly.

But if those 40 centavos is the official price, paying it takes a great deal of work. You have to deposit the correct change into the cashbox on the bus. The driver, in addition to his stressful work, has to pressure the passengers to pay – and his remuneration depends on what he collects.

But small coins in this country can only be found in the banks and you have to stand in long and tedious lines to get them. And the banks are open, generally, the same hours as all other places of work.

The majority of the public fight to get on the “workers” buses, they happily pay the price, given the escape that it implies from a mobbed bus stop with no other prospect in sight. In the end, they also end up paying that same peso in the bus that’s supposed to cost only 40 cents.

Previously there were fare collectors working on the buses, who always had enough small coins to give change, but this was later proscribed by the authorities, with the contention that they were robbing the State of a large portion of the money collected.

The majority of the citizens, therefore, resign themselves to handing over a peso coin or bill; others give the driver a look somewhere between pitiful and challenging, and walk on without paying. I myself, alternate between both actions so as to achieve a kind of balance. In addition, I hitchhike whenever I can.

Apart from this, the deterioration in the transport service continues to accelerate, with no remedy in sight.  The Ministry of Transport has implemented a series of palliative measures, instead of solutions, and all have a common denominator: a higher price.

To begin, there are the buses especially for “the workers” – as if the others were for the lazy.  These other buses are supposed to transport the workers from certain workplaces. However, outside of this schedule they also cover irregular public routes, all at the price of a peso.

The majority of the public fight to get on these buses, they happily pay the price, given the escape that it implies from a mobbed bus stop with no other prospect in sight. In the end, they also end up paying that same peso in the bus that’s supposed to cost only 40 cents. 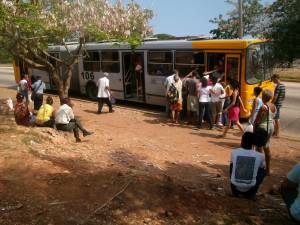 In addition to this, routes have also been established for another type of bus that charges 5 pesos.  One part of these buses work under a cooperative model and are also very sought after, to the point that it’s hard to manage getting on them because there are established limits in the quantity of passengers they carry.

Going back to the problem of the 40 centavo general transit price – that of the peso and the change: each time that this problem is mentioned by the official channels, they cast the entire blame on the lazy and unethical population for not paying their 40 centavos in a disciplined manner.

No one remembers the principle: “the customer is always right” and the fact that if a service costs a certain amount, I have no reason to pay more than that. The responsibility for giving change for the perfectly legal coin I pay with should lie with the person offering the service, isn’t that the way it works?

The authorities have refused to apply other tried-and-true systems that function all over the world, such as prepaid tickets, magnetic cards, etc, under the pretext of the difficult initial investment.

As if this wouldn’t cost less than a thousandth of what is invested in acquiring new vehicles, and it could immediately resolve the problem of fare collection.

It doesn’t matter that this signifies an increase of 250% for those workers who generally depend on public transport to get to and from work. The resulting drop in buying power that is now practically a given, will be made official.

And it’s worth remembering that the advantages of maintaining a subsidized price for public transport have been recognized in a slew of capitalist countries. Beyond just an aid to the lowest income sectors, it facilitates productive activity, contributes to environmental protection and saves the main arteries from a huge volume of traffic.  But I fear that the clumsy neo-liberal discourse of our modern reformists is also going to ignore these elements.

The problem and the solution, I fear, will be channeled down the easiest road: make one peso the standard price of a trip, period.  Maybe there’ll be some reorganization in the bus terminals so that the drivers’ salary be tied even closer to the passengers’ payment of the fares. In this way, the authorities get the problem off their backs by setting one part of the population against the other.

It doesn’t matter that this signifies an increase of 250% for those workers who generally depend on public transport to get to and from work. The resulting drop in buyng power that is now practically a given, will be made official.

And don’t count on the unions, the women’s federation or the neighborhood committees to mount a protest. They never protest against any government policy or decision.

It does come to mind, as a hopeful memory, that in contemporary Cuba there was one incident where the population managed to reverse a maneuver to raise the price of a form of public transportation.

In Santiago, the combative opposition of the citizens managed to roll back a planned service fee increase for a trip in the privately owned horse drawn wagons used as public transport in that city. Could this experience be replicated when dealing with a State-administered transit service?