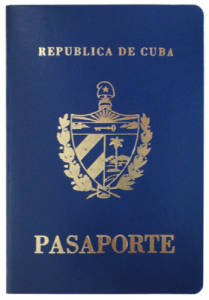 HAVANA TIMES — The issue I’ll address here is Cuban immigration policy and the hoped for “possible changes” in it.

This is a matter that has many people full of expectations since at the Communist Party Congress in April 2011, when upcoming reforms were announced concerning this important social issue.

Words like “visas,” “passports,” and “tickets,” so common for most of the world’s population, exist to us like notions from a sort of fantasy world.

A passport — that document that proves citizenship, identifies its owner and lets you travel from one country to another — is a rare and alien certification to most Cubans.

It can only be obtained when you receive a letter of invitation to travel abroad (from a friend, lover or relative), or when you are assigned to travel for your job on an aid mission, by your school for training, or when you win a scholarship.

Only under these circumstances can a Cuban pass through the entryway to the Immigration Office to apply for a passport, which will cost 55 CUCs (US $65).

It stands to reason that since opportunities to travel are so remote, no one would think of spending 55 CUCs (equivalent to three months of the average take-home salary) just to say they have a passport – not unless the possibility of a journey was assured.

Nonetheless, a friend of mine paid dearly for not having a passport. She was applying for a scholarship in Spain, and for this she had to fill out a form that asked for all of the relevant documentation. But one blank spaced remained: her passport number.

My friend met all of the requirements to earn a spot; her transcripts were impressive and she qualified in everything else. She made the cut in the first round of selections, but they sent her an urgent email asking for her passport number.

She explained the specifics of this process in Cuba and explained that it was going to take her at least 15 days to comply with their request. With that she thought she had convinced the Spanish selection committee.

In just a week, the results of the competition were made public online. My friend wasn’t on the list, but she received an email from the selection committee. They expressed their regret concerning her case, especially since she had appeared to be an ideal candidate for enrollment.

Notwithstanding, they noted that she had failed to provide one crucial bureaucratic detail: a passport number.

10 thoughts on “She Doesn’t Have a Passport”