HAVANA TIMES — A certain media source presents itself to us as a champion of the “revolution” and focuses its attacks on the activities of “diversionary” bloggers, journalists, human rights and civil rights advocates, and different sectors of Cuban society that operate from a position that is independent of the state.

It generally dedicates itself to attempting to discredit and defame different modes of thought, though actually trying to divert public attention from the problems that endanger the future of the Cuban revolutionary process and its systemic causes.

This involves a small group of “journalists” who in their abundant writings — with more adjectives than verified information — never, rarely or only superficially address the problems of bureaucracy, corruption, excessive centralization of economic and political power, the difficulties arising from the absurd monopolistic economic policies and the lack of popular and workers control over the processes that they claim to be “socialist.”

I won’t mention any names, because everyone knows who I’m referring to, in what media sources they “write” for, and what are their motivations. My goal isn’t to discredit anyone in particular (there are better causes in which to engage oneself) but to expose such methods as having nothing to do with socialism or revolution.

Gov. Bureaucrats Are the Most Dangerous Counterrevolutionaries

For those who have dedicated themselves to fighting against the “imperialist enemy and its agents,” real or fictional, they must defend tooth and nail all that has made the “perfect revolution” — understood as the work of a state — no matter the practical results, the “side effects” or that it has driven us to the edge of the abyss.

For them the “state socialism,” bureaucratic socialism, the so-called “real” socialism of the USSR and the “socialist camp” didn’t collapse as a result of their own deviations and errors. It was not because of their absurd policies at all levels, but as a result of the enemy activity of imperialism and its agents, the “betrayal” of Gorbachev and others.

Applying that same analogy to Cuba, it doesn’t matter that both Fidel and Raul said years ago that any disaster here would not be the fault of imperialism, but the inability of Cuban revolutionaries themselves to correct their mistakes.

In truth, the only thing that the journalists are accomplishing is diverting the attention of their readers from the reality of what’s happening in Cuba. They aim to avert a true “struggle of all the people” and to prevent workers from standing up against a bureaucracy that is trying to hijack the revolutionary process. 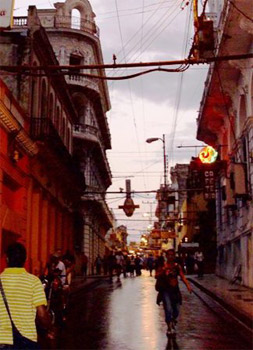 They are attempting to take over the existing machinery to convert the monopoly capitalism of the state system (or “state socialism”) into an increasingly privatized form of capitalism and with monopolies of detached groups from the state that enjoy the full autonomy to exploit the wage-labor of their workers.

To create, inflate and encourage “enemies” who really don’t pose a major threat to the process of the socialization and democratization of the economy and politics of the country, can only serve those who seek to divert attention in support of those who seek to restore private capitalism in our country.

It is the bureaucracy that is retarding democratic reform, using real power, given that they want nothing changed and are therefore hindering the process.

The statist bureaucrats are the ones who are preventing cooperativism, obstructing real and direct participation of workers and the people in the decision making process; hindering the freedom of information, discussion, opinion and association on the part of the Cuban people; violating the socialist constitution and attempting to privatize the means of production, openly turning it over  to  foreign capital or using the euphemistic “autonomous enterprises” (devoid of democratic control by the workers) controlled by power groups created under the state. They are the most dangerous counterrevolutionaries.

Undermining of the Economic Foundation

The well-known Cuban analyst Manuel David Orrio, a secret operative for Cuban State Security for many years — who no one suspects of serving the CIA and imperialism — said recently in an interview with Orestes Marti: “While people are picking at chicken crap ‘ideological diversionists’ of the likes of Yoani Sanchez and Antonio G. Rodiles, the formidable ‘CIA operative’ of inflation, or hyperinflation in its extreme, is undermining the foundation of the Cuban political system and endangering the very independence of the nation.” (See the interview in the magazine Hermes, in Spanish)

Students of Marx know that the causes of inflation are systemic and characteristic of economic models sustained by wage-labor exploitation.

These models generate more and more expensive products to offset the very high and unreasonable standard of living of the owners of capital — whether private or state owners — to pay for the high costs of new production technology and machinery that will allow them to stay competitive and swell the budgets that support their states’ bureaucracies and military and security forces.

Of course all of this is at the expense of the semi-slave-labor of their employees (See Karl Marx. Capital, Volume III, part 3, “The Law of the Tendency of the Rate of Profit to Fall”). Many of the subsequent bourgeois explanations ignore this law, discovered by Marx, or they take it into account only partially).

But this is not paid any attention to by these “combatants of the pen.”  I should note that these “journalists” certainly live better than all members of the “Association of Combatants of the Cuban Revolution,” people who did indeed risk their lives, and many were affected in different ways from frontal battles against the imperialist enemy.

More than an few of these veterans now have to eat in the smelly subsidized dining rooms that some technocrats and economists have tried to close. They aren’t analyzed in the writings of the “agents” of the CIA mentioned by Orrio, and much less what is directly responsible for their sad existences: that class which maintains and encourages the capitalist wage-labor exploitation of workers in Cuba.

It is clear: To invent enemies, to inflate “counterrevolutionary fetishes,” to blame imperialism for all our misfortunes, has always been a strategy of the bureaucracy. President Raul Castro himself has said he will no longer point to imperialism as being responsible for our misfortunes.

Who in Cuba has the intention and the real capability to divert the revolutionary process towards private capitalism? In Cuba today, who is the real and principal enemy of the process of the socialization and democratization of the economy and politics, the very essence of the revolution in today’s Cuba?

“So what do you think?” A question like that is a way to stimulate reasoning, according to what I was told by a prominent professor of Marxism in the advanced course for Soviet intelligence for senior Cuban intelligence officers back in the 80’s.

By the way, they also told me that many of those in Soviet Intelligence and in the Department of Marxism of the Academy of Sciences of the USSR, of which that distinguished professor was a part, were in favor of accelerating and deepening Gorbachev’s Perestroika, but they weren’t paid any attention to and then came the military coup, with all its known consequences.

5 thoughts on “So Where’s the Real Enemy?”