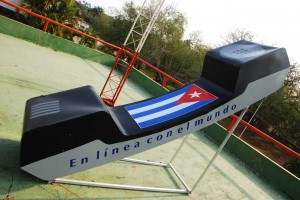 HAVANA TIMES — On December 7, the Granma newspaper reported on what may be called large-scale telephone fraud. Two foreign companies were able to provide mobile and landline telephone services to numbers of Cubans, charging them black market prices well below those set by the national telephone company, ETECSA, which typically monopolizes those services on the island.

Telecommunications abroad from our country operate with hard currency, which is not only extremely costly for low-paid Cubans but is also high priced compared to the international average.

The Granma article (in Spanish) concludes with a special point about how one of the people accused in the scam said they rented their phone out whenever it wasn’t being used for counterrevolutionary activities.

The writer describes the person making this statement as naive and adds “nor can we ignore the multiple incidents that have been orchestrated from abroad to nourish — from within the country — a campaign of subversion against the revolution.”

What stands before us is by no means a naive connection between corruption and one-party democracy in Cuba.

Is someone faithful to the communist cause who commits fraud against their own government?

Is this journalist right in describing this person as “naïve”?  What’s the real danger if someone tries to use a pirated phone line in order to express ideas contrary to the ruling regime?

Starting with the last question, legal communication systems are also used from overseas to send information that’s considered by many Cuban authorities to be counterrevolutionary. The price doesn’t change the essence of the problem.

As for labeling the person “naive,” the response is ambiguous: on one hand, we have to ask who is paying for the service, whether legally or illegally. You can call it what you want according to your personal convictions. On the other hand, the real danger to the revolution is not what’s expressed by citizens over the phone.

The first question has an obvious answer, though it’s avoided in the language cited by Granma article, corruption is a hidden, deep and a real threat to the foundations of the socialist system prevailing in Cuba. Those people involved in fraud represent a lack of belief in the communist values advocated in the statutes of the Party, the educational system and the many means for disseminating socialist ideas.

Socialism can’t be blamed for corruption, nor can capitalism. These are vices that have accompanied humanity since the emergence of all state systems.

As for democracy and party systems, the general trend of representative democracy is predominantly toward bipartisanship while communist systems were founded on the concept of a single party. One thing to consider is the set of traditions of the countries where socialist revolutions triumphed.

In ancient Russia, these traditions were shaped by the absolutism implanted for centuries by the tsarist autocracy. China, Vietnam and North Korea can be described as eastern monarchies that are equally despotic and overly centralized. In Latin America, Cuba follows the tradition inherited from Spain, where kings once prevailed, followed by caudillos.

Whether there’s one party or two, according to historical experience, is not what counts. What matters is the existence of a democratic will, reflected in the constitution authorization and endorsement — sacred for good reason — of the right to freedom of expression and organization, based on the greatest facilitation and the least limitation.

If people can organize at the grassroots (by profession, their diverse interests, backgrounds, employment and along other lines) free of partisan tutelage, then parties — whether one, two or three — will serve as the bearers of these freedoms. As leaders they will have those outstanding figures who, from within their ranks, from everything that in its whole we usually call civil society, and they will forge a genuine unity from diversity.

I think it’s valid to fight those who are corrupt without fearing the possibility of citizens using a landline of cellular phone, the Internet or even their own voices in the streets.

3 thoughts on “Telephone Fraud, Corruption and One-Party Democracy in Cuba”