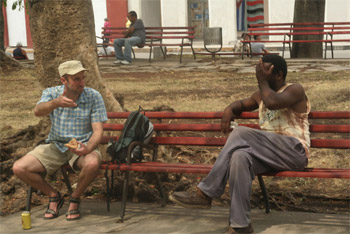 HAVANA TIMES — In July I underwent emergency appendicitis surgery at the military hospital located in the Marianao neighborhood, in western Havana.

I got there in the middle of the night with severe pain and a doctor on duty immediately treated me. She then sent me to have some tests done, but at that time of night the hospital is completely empty, so the place was like a maze to my mother and me.

To make things worse, we couldn’t find anyone to tell us how to find the department that did the emergency tests.

After a relentless search we finally succeeded in making it to the department, where we found a specialist in a bad mood (it seems we had inadvertently woken him from a deep sleep).

On the ground floor, one could see dirt with the naked eye. And when it came time for the urine test, which required me to fill a small glass tube, other difficulties cropped up. There was no light in the bathroom, so when I closed the door I couldn’t even see my hands, which resulted in me peeing down my leg as I tried to fill the container.

After six hours of observation, a doctor told me that he was unable to perform a laparoscopy on me, which is what they do to confirm appendicitis. It seems the hospital didn’t have the equipment. That was when I got upset. How is it that a military hospital doesn’t have this type of equipment?

Finally, by touching my stomach, some other doctors — as if magicians — were able to diagnose that I had appendicitis; so they quickly admitted me into the hospital that afternoon to undergo surgery.

Once in the operating room, they prepared me for the general anesthesia, while I laid there the whole time looking up at the lights on the ceiling. Just before losing consciousness, I thought I might never wake up. Dying in the operating room would have been a gift, a happy death, an escape from everyday problems.

But after a few hours I woke up. To my surprise I was still alive, and worse, in the same place. A few tears ran down my cheek. I thought about how everyday life would return in a few weeks, with me again experiencing ever-worsening shortages, living in this Cuba where nothing happens, where everyone is so manipulated and numb.

But at least I was alive. My mother was happy and I had my friends there with me. In short, death wouldn’t have been the solution to the problems, because even if I had died they would have continued for millions of other Cubans.

The best thing is to be alive, and continue moving forward, noting that some things are hopeless, like those who lead this country and how they must realize that things are going bad, how something must be done soon so that people don’t suffer as much as they do.

You can’t cover the sun with your finger; we are walking through increasingly thorny paths, but who cares?

After 54 years of supposed revolution, why do Cubans continue to live miserably, with shortages of all kinds? Who is looking out for our prosperity?

When I speak of prosperity I mean what it takes to live with dignity, to have salaries that meet our immediate needs, such as food and housing.

With yearning, I hope to one day wake up and see how things have changed for the good of all, that in the end those who lead us understand once and for all that the policy that has been in place for the past 54 years hasn’t worked, because there have been more mistakes than successes.

I know that day will come, so I think the best thing isn’t to die, but to stay, to see a future that’s not so distant.

3 thoughts on “The Best Thing Is Not to Die”