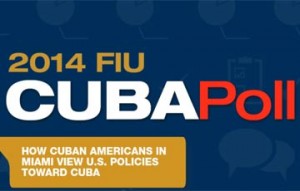 HAVANA TIMES — Cuba Poll 2014, a survey conducted by the Florida International University (FIU), has caused a great media stir and different factions within the Cuban community are venting their passions as they set out to ratify or challenge the results.

Some of the most significant upshots include the fact that, in Miami-Dade county, 52% of Cuban-born residents are against the US blockade and 86% in favor of maintaining the Cuban Adjustment Act.

These conflicts are of a psychological nature: from the legal standpoint, lifting the blockade that has been in effect since 1962 and maintaining the Cuban Adjustment Act (passed in 1966) is impossible. It is rather curious that even experts and analysts pour forth opinions without grabbing this particular bull by the horns.

There are two legal foundations that ought to be at the center of the debate and which are all too often neglected when people speculate about the Cuban dilemma:

According to the Helms-Burton Act (passed in 1996), the president of the United States can take measures to suspend the embargo if he believes that a “Cuban transition government” has come to power and notifies the pertinent committees of this following consultation with Congress. To lift the embargo, the Cuban government would have to give way to one that is “democratically elected” (as Section 204 establishes).

According to the Legal Immigration and Immigrant Responsibilities Reform Act (1996), the Cuban Adjustment Act would be revoked if and only if the “democratically elected government” demanded by the Helms-Burton Act comes to power in Cuba.

The contradictory aspect of the opinion poll is that those surveyed do not appear to adhere to the political decision that establishes that the Cuban Adjustment Act presupposes the embargo (and vice-versa), until the White House determines that Castroism has disappeared in Cuba.

Another far more significant contradiction thus comes to the fore: if the embargo were contributing to the disappearance of Castroism, the Cuban Adjustment Act would be helping perpetuate it, driving a constant exodus of Cubans that, after settling permanently in the United States (some 384,344 Cubans did so between 2001 and 2012), enter into the travel and remittances industry. The Havana Consulting Group estimates that Cuba takes in US $ 2.8 billion in cash through remittances and US $ 3.5 billion through in-kind remittances sent from the United States.

And, since a quarter of a million Cuban immigrants acquired US citizenship between 2001 and 2013, the anti-Castro electorate is being gradually eroded by voters who, in their overwhelming majority, are moved, not by the historical mission of establishing a “democratically elected government in Cuba,” but by the personal desire to make their lives in the United States more comfortable and helping their relatives back home, even if they’re aware that they are also helping the regime this way.

How will these contradictions within the Cuban community ever be reconciled?
—–
We also recommend: How Cuban Americans in Miami View US Policy on Cuba.