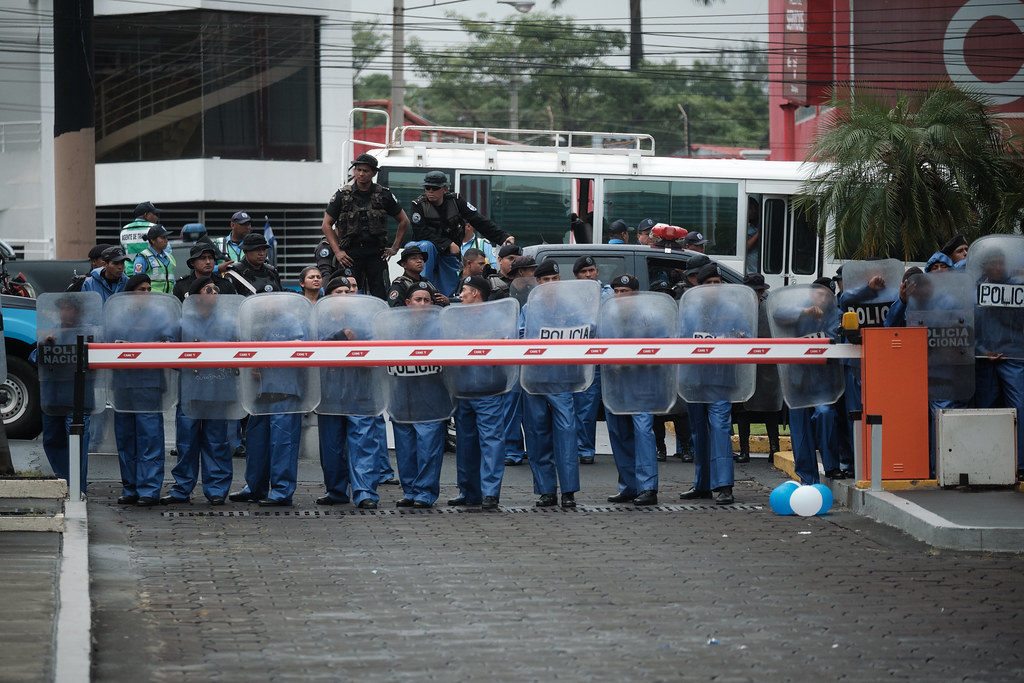 The country needs more national and international pressure to bury the state of emergency. You cannot go to a free election under a state of siege

HAVANA TIMES – This September, it has been a year since the imposition of a de facto state of emergency in Nicaragua, which has effectively suspended constitutional rights, without the National Assembly having decreed a state of emergency by law.

For twelve months, the Ortega Murillo dictatorship has tried to impose order and “normalcy,” violating the constitutional rights of Nicaraguans. After the April 2018 massacre and the “Operation clean-up” that followed, Ortega has criminalized freedom of the press and expression and the right to peaceful assembly and mobilization, preventing the celebration of civic marches, like the one that was repressed this past Saturday by hundreds of police and paramilitaries in Managua.

The regime’s repressive forces have also committed new crimes such as the killing of political prisoner Eddy Montes in custody; or the self-organized Bryan Murillo in his own home in Leon; or the murders against several members of the Montenegro family in Jinotega, and dozens of peasants in the north of the country. All these crimes, like those perpetrated during the April repression and “Operation clean-up,” remain in impunity.

However, the state of emergency had failed miserably, because the dictatorship has not been able to overcome citizen resistance or demands for democratic change and justice. No one has given up or signed an agreement with Ortega, neither the citizens, nor the business people, despite reprisals, co-optation and tax persecution.

The state of siege was first defeated in the prisons, where despite torture and inhuman treatment, Ortega was never able to break the morale of political prisoners, nor subdue them. He was also defeated in the streets, where the civic protest that was born of the April rebellion remains alive, now in a more organized and less spontaneous way.

In contrast to censorship, media confiscation and persecution against journalists, Ortega has lost the battle for the truth, in the face of resistance from the independent press. While at the international level, the regime finds itself more isolated at the OAS and the UN, where the government narrative of “a failed attempt at a coup d’état” has not allowed it to justify the curtailment of public liberties.

With the defeat of the state of siege, Ortega’s latest attempt to preserve his authoritarian project has failed, unable to rebuild his economic alliance with big capital, at the expense of democracy and transparency.

A year since the imposition of the de facto state of siege, Ortega has failed to add a single business ally to provide legitimacy to his bloody dictatorship, because unanimously the entrepreneurs have reiterated that it is not possible to accept an economic negotiation with the Government, if the cause of the problem that resides in the political crisis is not solved. A terminal illness that demands electoral reforms and early elections.

The consequence of this massive human rights crisis has been the stagnation of national and foreign investment, economic crisis and the forced migration of more than 70,000 Nicaraguans in exile. The only thing that Ortega has achieved by cancelling the political negotiation with the Civic Alliance has been to aggravate the economic recession with more unemployment, more poverty and more international isolation, with the warning that more severe economic sanctions will be imposed, which inevitably will also affect the regime’s supporters and Sandinista business people.

After a year of the failed state of siege, the country needs more national and international pressure to achieve the suspension of the state of emergency. You cannot go to a free election under a state of siege. It is imperative, therefore, to clear the path towards electoral reform, so that the “people-president,” as Ortega proclaims, can decide in free elections if they want to continue in a dictatorship or support a deep democratic change.

Ultimately, the national dilemma resembles a plebiscite that is summed up in two options: on one side, the dynastic Ortega Murillo project, and on the other, the offer of democratic change of the Blue and White Movement, to begin to resolve the economic-social crisis and lay the foundations for justice without impunity.