HAVANA TIMES, March 27 — For many years, the issue of poverty and marginalization was taboo in Cuban social sciences. It was a theme that was incompatible with the triumphant political line of a revolution that had supposedly eliminated — forever — the scourge of social exclusion.

If the ethos of the new revolutionary era was that of equity and prosperity, it would have been quite costly to recognize, without dismissing the social achievements, that part of the population had essentially remained without social mobility and that only a part of society had benefitted.

Any such disruption of the image could cause a painful collapse, since the social gains would not be seen as long lasting if they did not rest on solid economic foundations.

After three decades of that “victorious-march-of-history,” the realization hit that part of the population was indeed poor, even within the vision of plebeian austerity that the post-revolutionary political class had elevated to the rank of a virtue, though they themselves had been careful to avoid such acetic living conditions.

I remember in the 1990s — when all of society was pummeled by the tsunami of impoverishment — there were several contingents of ideological condottieri that engaged in all manners of rhetorical juggling.

Their aim was to show that even though people ate poorly, lived in sub-standard housing, endured blackouts, pedaled World War II bicycles, suffered from malnutrition and were succumbing to neuropathy, they weren’t poor. Instead, they had only the proclivity to become that way. Technically the population was “at risk.”

Since the beginning of this century, this circumstance of analytical orphanhood began to change. Despite isolated efforts by some economists to approach the problem of social impoverishment in Cuba more objectively, the main contributions have come from sociology, anthropology and geography.

A group of researchers from several academic institutions managed to place the issue of poverty in its proper contemporary framework. They did so from a duel perspective: socially and spatially. In other words, they analyzed how many Cubans were in fact poor, along with the number that could be considered as such from within the social stratum they occupied, and these investigators also looked at where these people lived.

Perhaps this delay by academia in recognizing Cuban poverty was due not only to political pressures, but also the way this phenomenon presented itself here.

On the one hand, given the existence of strict state control over land use and the population, urban poverty didn’t materialize itself as immense favelas like in other Latin American countries.

Instead, the existing city began swallowing up those marginal elements by creating densely populated pockets of poverty in tenements, old mansions divided up ad infinitum and buildings overloaded with precarious barbacoas (new living areas on floors built between in spaces with high ceilings) wherever there was sufficient space.

All neighborhoods of the city displayed the ravages of this spontaneous occupation, which led to variegated urban situations that were frankly deplorable. Yet in these, poverty in itself emerged rather inconspicuously.

Moreover, even in situations with serious shortcomings, ordinary Cubans had access to education and health, sometimes of high quality, which blurred the classical picture that typifies marginality in Latin America.

To give one example, I remember a case in the Cayo Hueso section of Centro Havana where a dismal tenement had only one toilet for use by 12 families. The rooms, in which all the households had added basic kitchens, were small, damp and poorly ventilated.

Nonetheless, among the families who lived in that hovel, there were five university graduates and a world-class athlete. Undoubtedly they were all poor, but evidently in another manner of being so.

However, since the 1990s, after the relative panacea of the subsidized economy ended and the crisis appeared here to stay, what became accentuated was internal migration from the countryside into cities and from “the interior” into Havana.

This latter case arose with the peculiarity of these individuals becoming “illegal” solely because of them having moved, since the Cuban system does not recognize — along with many other civil entitlements — the right to free movement.

Consequently, this not only increased the overcrowding in our classic solares (tenements), but there began to appear shanty towns either created on depopulated lands or added to previously existing substandard housing in agglomerations already in place.

A pioneering study undertaken by teams of geographers from the University of Havana in 1996 indicated the existence of 181 settlements in Havana that were inhabited by roughly 75,000 people. These were euphemistically described as “unhealthy.”

In one municipality alone, Playa, nine settlements were identified containing 2,360 homes and about 8,000 residents. One of those settlements, Romerillo, was the largest in the city, with 1,114 homes. Another one, Bajos de Santa Ana, with more than 700 houses, bordered another community that remains a world apart: the upscale Marina Hemingway area. 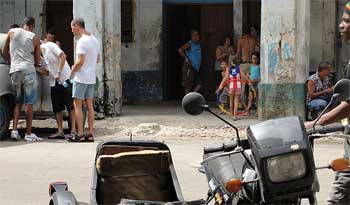 But I don’t think that an analysis has been produced so far that is as complete, professional and sincere as that conducted by anthropologist Pablo Rodriguez. This is in an easily digestible book that defies the petty ideologists with its very title: Los marginales de las Alturas del Mirador (The marginal residents of Las Alturas del Mirador).

The work was just recently published by the Swiss cooperation agency (COSUDE), the Institute of Anthropology and the Fundacion Fernando Ortiz.

The study was conducted in 2004 in a marginal neighborhood — Las Alturas del Mirador — consisting of about 200 homes in the depressed San Miguel del Padron community on the outskirts of Havana.

Its establishment dates back to 1992 when, impelled by the degradation of living conditions in their dwelling places, dozens of families began to erect housing on a patch of brush-covered piece of land near the Ocho Vias highway.

The houses — almost all of them having dirt floors, no running water, precarious electricity supply, and corrugated metal roofs that turned them, says the author, into veritable “crematoriums” — were located on “unpaved streets, with no sidewalks, no gutters…along dusty and dirty roads under an intense sun on clear days or true quagmires after a light rain. “

Almost none of the households had home appliances, and in those few instances where they did, these consisted of “electronic Frankensteins” – jerry-rigged contraptions fashioned through inexhaustible street smarts.

Of the residents, 83 percent were black or mulatto, and 79 percent were immigrants from other provinces, mainly from the east/south. Curiously, half of the adult population had more than six years of education and illiteracy was limited to only one fifth of those residents over 55 years of age.

The children and adolescent population had access to the educational system, but medical care was evaluated as “marginal” and not free from discrimination and abuse.

That latter service was restricted due to the legal precariousness of the neighborhood’s inhabitants – who, to quote Rodriguez, “lack a sort of citizenship of the city” because of the repressive Decree-law 217 of 1997, only slightly modified by Decree 293 of 2011. 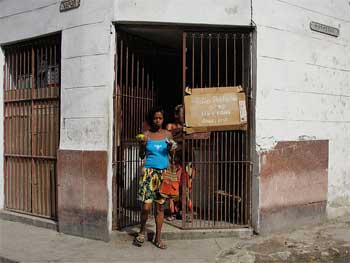 As a result, these people have no subsidized ration books and nor can they enter into legal contracts, marry or attend college.

Although many of these families have spent nearly two decades living there, they have been unable to substantially improve their living standards.

As a consequence, the people remain even poorer due to their legal status, which maintains them on the lowest rung of the labor system, even when they possess higher levels of education.

Because of all of this, they were characterized by having very low incomes.

According to the study, 20 percent of the households were unable to meet minimal dietary standards, a condition that placed them in a state of absolute indigence. Moreover, a total of 60 percent could potentially find themselves in that situation and were prevented from accessing other needed consumables.

In other words, the vast majority of the population was subject to a system of sub-basic consumption. In most cases this was related to the lack of ration books, which at that time (2004) was more significant for family budgets than it is today.

Another curious fact was that only 52 percent of the heads of household reported themselves as being systematic practitioners of any religion, those who were believers had adopted mainly Afro-Cuban religions and Protestantism. Pure Catholicism was almost completely absent from the community.

Finally, all of the respondents said they were supporters of the revolution, which they identified with precisely owning those things that they didn’t possess and that would have guarantee them a decent life. This is to say, the revolution to them meant a situation from which they were excluded.

The residents who were interviewed showed profound disappointment — the worst of all political sentiments — over the fact that a person described the neighborhood’s children as lacking equal rights with those enjoyed by, say, Elian Gonzalez.

I think studies like these allow us to realistically assess the situation being experienced by our society, meaning all of the emigrants and residents on the island.

These point to the need for policies that focus attention on these vulnerable groups (those who lose out in the revolutionary process) and the incentives needed for local socio-economic development in a system that is crying out for greater decentralization.

The nation needs a new vision in which responsible development and implementation relates to everyone, not just to a political class more interested in their bourgeois conversion than in the common good.

For this new vision, we must digest works like this one by Pablo Rodriguez (which I recommend reading) and thank him for his contribution and for believing that, despite everything, there is a nation.

It has been eight years since the author conducted his research. Since then, I don’t know what happened to that contingent of losers that Granma editor Lazaro Barredo has described as “nestlings with open beaks” that needed to adapt.

I don’t know how they will withstand the ravages of the “updating” (reforms), which is said to be ready to eliminate the entitlements that are burdening an economic takeoff. Possibly the brightest ones have managed to survive falling through the cracks, like they always have, by bribing officials and the police.

I would like to think that all of them are doing better, but I doubt that they all are. In the end, as Pablo Rodriguez wrote “living in a shanty town is the agony of attempting to stay afloat against a set of forces that push you under.”
—–

(*) A Havana Times translation of the original published in Spanish by Cubaencuentro.com

One thought on “The Losers of a Havana Shanty”