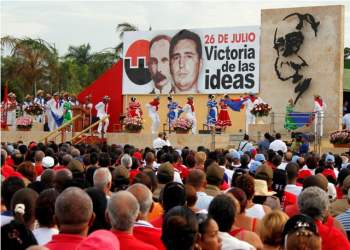 HAVANA TIMES, Feb 25 — Another of the big lies used against the Cuban Revolution to assert that democracy doesn’t exist in Cuba is so-called “single-party system.”

It’s said — wrongly, and with deliberate intentions — that there’s a single party in Cuba. The truth, though, is that there is no political party in Cuba, at least not the kind that’s known for running candidates in elections.

The Communist Party of Cuba (which gave itself that name through the decision of its delegates at its First Congress) could have also been called, for example, the Cuban Revolutionary Party, like the one that Jose Marti founded to organize and lead the war of independence against Spain. In other words, it wasn’t a “traditional” political party.

Nor is there a traditional political party today in Cuba, but a selective organization, one in which only the best revolutionaries can belong, since it is the organization that looks after the welfare of workers and of all the people. It therefore has the prestige and authority to require the government at all levels to carry out those measures that benefit the working people.

This is a party that is organized so that it can impose its authority and ensure the smooth functioning of this more just society that we Cubans are building.

The structure of the Communist Party of Cuba resembles a pyramid, with the Central Committee, Political Bureau and the Secretariat on top.

Each province has a provincial committee, and in each municipality is a municipal committee.

Each exerts its control and its demands so that the governments at those levels meet their obligations.

Moreover, in every workplace there is a rank-and-file party organization that monitors the work of administrators and management. 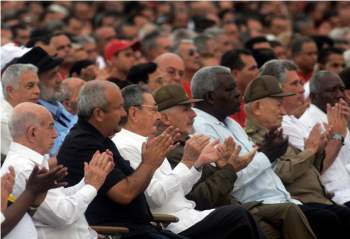 At all these levels, people who are not party members rely on the party members and support them, because they know that the primary mission of these activists is to defend their interests, hence the work of the party involves all citizens.

For example, the “Guidelines” document adopted at the Sixth Party Congress were discussed and enriched by all the members of the organization and by all workers in their unions. They were also analyzed with all citizens through mass organizations, which collected thousands of suggestions to enrich the language of the document that was approved by the congress.

These guidelines will govern the country’s economic policy for the next five years, while the government, along with the entire economic structure, will be required to implement them.

Article 5 of the Constitution of the Republic of Cuba clearly expresses the functions of the party in stating: “The Communist Party of Cuba, a follower of Mart’s ideas and of Marxism-Leninism, and the organized vanguard of the Cuban nation, is the highest leading force of society and of the state, which organizes and guides the common effort toward the goals of the construction of socialism and the progress toward a communist society.”

Cuba’s Communist Party does not nominate any of its members to run as delegates (for city councils) or deputies (to the legislature). It is the people, gathered in neighborhood assemblies, who propose the candidates – regardless of whether they are party members or not. They consider only their moral standards, prestige and their capabilities to execute the job.

The Cuban political system is based on participatory democracy so that every citizen has the right to propose candidates and to oppose any proposals they deem unacceptable. But that’s a topic for the next article.