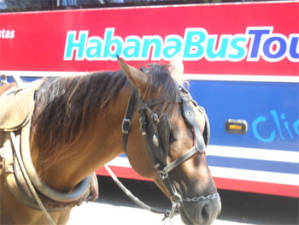 HAVANA TIMES — The queue of horses around Central Park, hitched to their coaches and lathering under the sweltering summer heat, was a spectacle that denigrated us as human beings.

It was that time of day when the thermometer soared, when electronic equipment demanded air conditioning or else risked burning out, and when everyone who was forced to wait in the open — but having at least a minimum freedom of movement — took refuge in some small island of shade.

Even the stray dogs — no matter how famished they might have appeared — try to hide from the sun’s rays, as of course did the drivers of those carriages, dressed in styles reminiscent of days gone by, trying to lure tourists with their anachronistic appearances.

They attempt to immerse the visitor in the dream of a Havana that no longer exists, giving three dimensions to those tantalizing postcards, travelogues and tourism guidebooks. 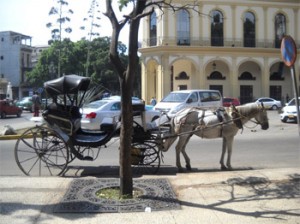 But all of this is at the expense of those animals, unable to follow their own instincts, standing on the boiling-hot asphalt, their heads lowered, eyes downcast, moving their tails languidly in a vain attempt to brush away the flies.

In a fit of desperation, I approached one of the drivers who were waiting for some random customer while sitting under the relief-giving trees of the park. I asked him point blank: “Why you are in the shade and forcing your horse to stand in the sun?” But the good-natured expression on his face stopped me.

When he admitted to being the driver of one of those horse-drawn carriages, I asked again without concealing my anxiety: “Why do you guys have these horses standing out in the sun? It’s cruel!”

To my surprise he nodded, sadly 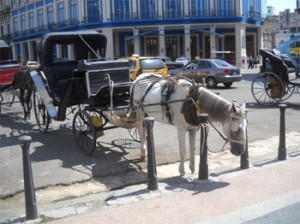 “What we would like is to put them in the shade, but the authorities won’t let us. Look, the driver of this one (pointing to one of the carriages parked on the edge of Paseo del Prado boulevard, an area directly in the scorching sun) had parked his rig over there (this time pointing to a patch of shade in front of the Central Park Hotel), but a police officer immediately shot out of nowhere and gave him a ticket.

“But why? I don’t understand – you guys are handling living animals, not machines!” I questioned.

“It’s because they don’t allow us. We can only park the carriages in areas where parking is permitted,” he answered.

The gentleman looked at me, more tired than surprised, and then made a gesture that meant “write to whom, complain to whom?” 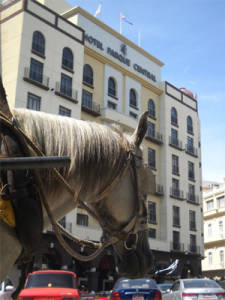 I thanked him and walked away thinking about the city historian, Eusebio Leal, who is charged with the redevelopment of Old Havana. He’s a man reputed to feel compassion toward to animals, so if he hasn’t noticed this criminal negligence, it should be made known to him.

The Havana that’s trying to imitate the 19th century doesn’t condemn humans to dancing non-stop, like in the terrible story in the novel by Horace McCoy, yet it condemns these animals to immobility and hyperthermia, even though their work (involuntary) is a source of income for the country.

I thought about the movie It’s All about Love, where people suddenly fall down in the street, as if struck down by the cold…or a lack of love.

And what if those horses were to fall like that, one by one, victims of indifference or lack of love, or even worse this horrible temperature that we can barely support with our restricted freedom of movement and our limited technology?

Along with the buildings that collapse without warning, crushing the dreams of entire families, the spectacle of these horses makes any postcard of Havana seem simply implausible.

One thought on “They Shoot Horses, Don’t They?”