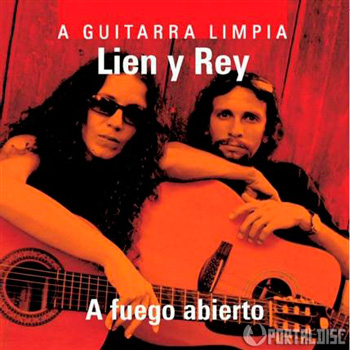 HAVANA TIMES — Lien and Rey stand out among the many Cuban folk music duos on the island today. The band’s members, Lien Rodriguez and Reinaldo Pantoja, have participated in music events across Cuba, including the Romerias de Mayo (“May Festival”), the Longina Festival and many others.

Their album Leidos y escribidos (“Read and Wroted”), produced by the Pablo de la Torriente Brau Cultural Center, was nominated at the 2008 Cubadisco Music Awards. That same year, they won the Best Vocal and Instrumental Album Award for their album A fuego abierto (“On an Open Flame”).

Their pieces always seem to be impelled by the authors’ need to express something, and that “something” is never trivial. The voices of the two performers fuse perfectly and achieve a whole range of interesting tonalities, gaining and losing volume in step with the momentum of each song and driven by the search of a peculiar sound.

A number of their songs rely on repetition, a form that gives their performance particular intensity.

Their band has expanded and has also begun to perform outside Cuba.

No matter how early I wake up / I can’t seem to be the early bird / No matter how hard I try / my trunk’s still twisted.

In keeping with the social commitment artists tend to have (at least in the traditional conception of the artist), Lien and Rey cast a critical glance at society, specifically at the cultural issues and problems that make contemporary Cuban society something of an absurd spectacle.

They rightly target the revolution’s cultural policies and the concept of “mass culture” that has prevailed in Cuba, bringing to light the unspoken and degrading gaps in the system.

For those readers of Havana Times who are not Cuban or are unfamiliar with our linguistic idiosyncrasies, the phrase “leidos y escribidos” is a neologism that is fairly widespread in colloquial Spanish, used to describe intellectuals or academics (the correct expression, which deprives the phrase of its sting, is “leidos y escritos.”)

The colloquial form of the title song fits like a glove, because one of the many things it criticizes is that peculiar blend of different forms of semi-erudition that characterizes Cubans today, turning them into a being that is semi-educated and burdened by the ignorance of many previous generations.

This situation is also colored by the absurd, brought about by the failure of the educational and civic model we have endured over the past few decades. Vulgarity, frivolity, superficiality and self-interest – all of these phenomena have become mixed in such a way that things are upside down and culture and rigorous work only begets us poverty and neglect (while reggaeton singers cruise around town in luxury cars).

The song also alludes to another regrettable situation. As the authors play around with popular sayings so much, I would venture to say that “no one is a prophet in their own land.” It is common to see artists with a little or a lot of talent make a small fortune abroad and be received with open arms when they return to Cuba.

As the duo says, “whatever isn’t born does not grow.” There’s something amiss in all of this and no one seems to know how to fix it. It is a manufacturing defect that no cultural revolution can eliminate. Regrettably, this problem, which affects us in Cuba, transcends the borders of the island.