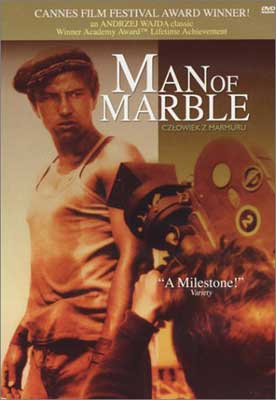 HAVANA TIMES — In the 1930s, at the height of Stalinist terror, a Russian miner called Aleksei Grigorievich Stakhanov, became famous – and infamous – for supposedly having extracted 102 tons of coal in less than 6 hours, exceeding his quota by a factor of 14.

Under the direction and thrust of the Communist Party of the USSR, and, of course, with the support of the unions totally controlled by the government, the Stakhanovite movement spread to all industries forcing the competition for hyper production among workers.

Stakhanovism left a very bitter memory in the political culture of the USSR and Eastern Europe, analyzed and pictured in the unforgettable film The Man of Marble, by the Polish film director Andrzej Wajda.

It was that quasi mythical figure of Stakhanov that came to mind when I read the May Day speech and interview published in Trabajadores (April 29, 2012) with Salvador Valdés Mesa, general secretary of the Confederation of Cuban Workers and member of the Political Bureau of the Cuban Communist Party.

In fact, Valdés Mesa sounded a lot more like the Head of Personnel of the Cuban state than a union leader particularly when we consider that the unions exist to defend the interests of the workers, even in a supposedly socialist state.

Although in his interview Valdés Mesa mentioned, almost in passing, the improvement of working conditions and consumer goods as a goal of his Confederation, he did not even mention the subject in his May Day speech. It is clear that the dominant theme in both pronouncements was his demand for the Cuban workers to work harder and more productively.

A legitimate workers’ leader would at least have asked for a salary increase to protect the Cuban workers from the uninterrupted rise in the prices of consumer goods. But Valdés Mesa did nothing of the sort.

Without ifs or buts he declared that there will be no salary increases “while the country, with the measures that have been adopted, has not yet reduced payrolls and eliminated undue subsidies and free goods that conspire against an increase in the productivity of labor.”

The union leader did not even demand an improvement in the notoriously deficient transport system so that the workers could get to work on time thereby contributing to a rise in productivity.

Neither did he demand that the administrators share in the sacrifices of the workers and that they also become productive.

To be sure, the union leader defended piecework rates (pay “according to results”) rejecting the well established union principle that opposes pay by piecework in favor of payment according to time worked.

It is obvious that in contrast with piecework, from the point of view of the workers, compensation according to time worked constitutes an elementary defense against super exploitation by the bosses, in this case the state being the boss.

Besides, pay for time worked is more compatible with the development of solidarity among workers, while piecework stimulates competition among them. Can there be any doubt about which of those would be the choice in a socialist economy and society truly controlled by the workers in contrast with an employer state like the Cuban?

Valdés Mesa also rejects the right to seniority. Throughout the history of capitalism, genuine unions have insisted in giving priority to the workers that have worked longest not only to defend the older workers, for whom it would obviously be more difficult to find a job, but also to protect all workers from favoritism and the arbitrary behavior of supervisors and bosses.

But Valdés Mesa rejects seniority – and ignores any other measures that would protect black workers and women – on behalf of “suitability,” precisely the criterion favored by big business in the capitalist countries when they lay off workers.

Billionaire Michael Bloomberg, the mayor of New York City, where I live, has undertaken a big campaign to layoff public school teachers without regard to seniority, supposedly to retain only the “suitable” teachers. But the real agenda behind this policy is to attack the teachers’ union and weaken the solidarity among its members.

And how is “suitability” to be determined in Cuba? As decided in 2010, this will be the task of a “Committee of Experts” elected, by a show of hands, in general workers’ assemblies, before which a slate of candidates jointly elaborated by the enterprise management and the official union will be submitted.

For anyone aware of the political situation in Cuba, it is obvious that those elections will be purely cosmetic. It is worth noting that the government has excluded from the jurisdiction of the Committee of Experts any decision affecting administrators and political cadres and leaders.

The work status of those people will be decided by the institutions and authorities that appointed or elected them.

It is evident that not too many Cuban workers see their official unions as genuine unions and as a “suitable” instrument for the defense of their interests, whether inside or outside their workplaces.

Valdés Mesa implicitly recognizes this when he admits, in the interview published in Trabajadores, that “there are workers who do not believe in the union.”

It is understandable that for this and other reasons the general secretary of the official central union is worried about the Confederation having the “capacity to be a protagonist in the updating of the economic model.”

That is why the official workers’ confederation has organized the newly self-employed people; the union leaders already claim that they have recruited the great majority of these.

Although we do not yet know for sure what the Confederation is planning to do with the self-employed Cubans (and quite apart from the fact that only a minority of these are workers and that the great majority are proprietors, although of small businesses) is there any doubt that the main impulse behind this is to control the self-employed just as in the case of the state workers?

It is very clear that the official workers’ confederation and its affiliate unions are not authentic unions but representatives and allies of the employer state.

It is also clear that never before has an independent union movement been as necessary as in the present transition towards a new exploitation model that will likely lead to numerous protests by workers and peasants as has happened in China.

What will the nascent independent left in Cuba do in regard to such an important matter?
—–

(*) Samuel Farber was born and grew up in Cuba and is the author of numerous articles and books about that country including his most recent Cuba Since the Revolution of 1959. A Critical Assessment (Haymarket Books, 2011.)