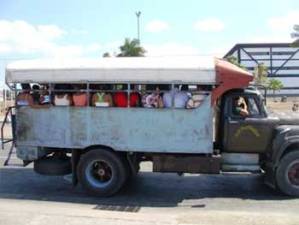 HAVANA TIMES, May 4 — Urban transportation, as the system vehicles for moving people within cities, is one of the most pressing problems in Cuba.

Our economic and logistic inability to purchase automobiles is the result of the economic embargo on the island, but it’s also due to the disastrous handling, decision making and allocation of resources by the government.

The result was people doing all types of things to get a car, since private exchanges were illegal. Only recently was the selling of cars decriminalized. 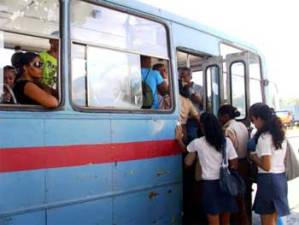 The inventiveness of Cubans is unlimited when it comes to survival and tackling one of our biggest daily headaches: transportation. To deal with this, people have implemented several ways to achieve the movement of so many souls outside of the fabulous world of the individually owned automobile.

State-administered public transportation has not succeeded, is not succeeding and will never succeed at supplying the ever-increasing needs of the population (paraphrasing the terminology of our old “scientific communism” courses, now renamed “socio-political theory”).

So, leaving us no choice, we’ve had to turn to private transportation, thanks to which we can usually get to where we’re going on time or not arrive as late as we would otherwise. 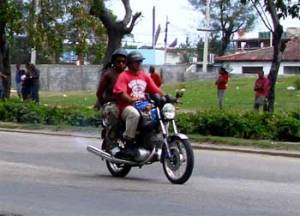 What’s curious is that this means of transportation in Cuba has a range of providers.

One form is of course the fixed-route, multi-passenger jitney taxis, which are mostly old Fords, Chevrolet, Willys, etc. In Havana these have been baptized “almendrones” (or “big almonds”) owing to the shapes of those enormous jalopies from the 1950s).

People also ride on motorcycle/taxis, individually-owned TZ, MZ, Jaguas or other brands of motorcycles dating back to the 80’s, which was when they were imported here from the countries of the now-extinct East European socialist bloc. 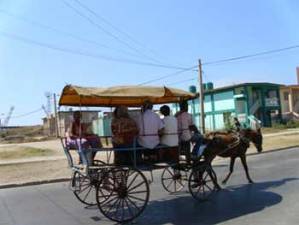 Another form of transport is in trucks and vans that cover the same routes as the public buses. These are most commonly used in places like Santiago de Cuba.

With no shortage of mechanics, some of these creative individuals came up with “Bici-taxis” (bicycle-rickshaws), which take fourth place on the list of the most used forms of transportation here. What’s most notable is that these aren’t phenomena unique to this or that city; bicycling is used in every city and town in Cuba to get people here and there.

And since we’re such a traditionalist people, there’s always the horse-drawn wagon, that ancient means of past centuries. As singer Silvio Rodriguez once said: “The past is winning new fame.” 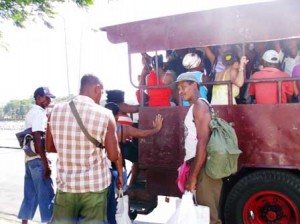 What’s more, this form of locomotion in not used exclusively in the historic city of Bayamo, where most citizens get around in wagons and carriages. Nor is it limited to the streets of Old Havana, where it can be seen as a kind of gimmick to entertain tourists with memories of colonial Cuba.

In all provincial capitals, municipalities and villages, horse-pulled wagons play a significant role in getting people to work and schools, to appointments, or just being able to travel from more distant locations.

Our different types of urban transportation will one day be museum pieces that illustrate how we lived in Cuba for more than half a century.

2 thoughts on “Urban Transportation in Cuba”