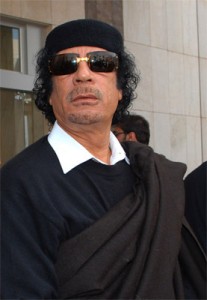 Gadhafi was killed in his native town by rebel troops. After several months of bloody struggle, devastation, and material and human losses, the former Libyan leader was finished off. He who for more than four decades governed that African country died at the hands of his own people.

As the leader of the so-called “Green Revolution,” he had carried out an entire series of economic, social and political reforms.

Those in these first two areas truly contributed to the improvement of the quality of life of the Libyan people, keeping in mind that we’re speaking about a nation that has valuable natural resources. The economic reforms and social legislation seemed sufficient to keep Libya advancing at a steady pace.

However the political aspect is always the Achilles heel in those countries where a sole and plenipotentiary power is established in one person and ultimately leads to dictatorship.

The opponents of Gadhafi didn’t want him at the head of the power any longer; therefore they began the uprising in which everything unfortunately ended in armed NATO intervention.

The major powers saw the Libyan conflict as nothing more than an excellent opportunity in which their intervention would have concrete rewards.

From the very first bombings until the new government’s installation and a little after, each day of encirclement and siege laid against the town where the ruler was hiding, in addition to the injuries and deaths of thousands of civilians, will be recorded in history as another of the great acts of genocide.

The sad thing is that all of this could have been avoided had it not been for the obstinate position of the hierarchy attempting to cling to power.  Still, even if the crisis hadn’t reached the point that it did, perhaps the NATO invasion would have happened anyway given the desperate situation of the developed nations in the middle of a world economic crisis.

But the ground fighting would not have been between Libyans.  The people would have risen up in arms to defend their nation against enemy aggression.

The cause would have then been noble: patriots offering their lives for their homeland, not political powers.

Today a dictator was overthrown leaving a devastated country and a wounded nation.  Four decades after the green of the Libyan Revolution, it has taken on a shade of red.

10 thoughts on “View from Cuba on the Killing of Gadhafi”