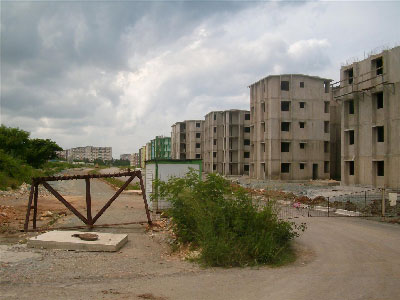 HAVANA TIMES — According to the official discourse, we are a poor, blockaded country with few resources at our disposal, and are unable to build all of the houses the people need. That said, our country is also just: we refuse to have a society where a few have a lot and the majority has nothing.

A good part of this is a lie and I am going to prove it. The photo you see here is of a new residential area, built in less than a year in Havana’s Camilo Cienfuegos neighborhood.

And who are to benefit from this architectural wonder, which has absolutely nothing to do with the Soviet style which prevailed in Cuba’s mono-block building era? None other than the military.

In no time, they have mobilized workers, construction machinery and materials to erect this building complex. All the while, people who have been living in shelters for decades continue to wait for decorous housing.

If these military officers did not already have homes, the whole thing would be less shameless. However, I know that some of the future residents of these new buildings are already living in more than decorous houses. They are living with their parents and grandparents, true, but so are we all in Cuba.

Why does a military officer have the right to live comfortably with his/her spouse and kids while others are forced to live in sub-human conditions? Because they defend the country? But wouldn’t such a war be an “all the people’s war?”

Someone told me that, once, people in a shelter moved into one of these residential areas without authorization and there was no way to get them out. This time around, they built a wall around the area to prevent this from happening again.

Luis Miguel del Bahia: I am not from anywhere – I am born only of Being, or so I seek to be. In truth, I was born in Havana’s neighborhood of Bahia in the year 1989. When I reached adolescence, I felt I didn’t fit in here and managed to leave for Spain. Working at a factory, I came to understand what capitalism was and that I didn’t want it for the rest of my life. I decided to return to the neighborhood, where I currently work as a computer programmer. From time to time, I open a philosophy book to try and understand the System.

5 thoughts on “Walled in New Apartments for Cuba’s Military”