HAVANA TIMES — Long before President Barack Obama thought of running for political office, the seed of discord was sown in Miami in 1998 with the creation and training of anti-Cuba groups disguised as Independent Journalists, Independent Librarians, Independent Farmers and Independent everything else, with the sole purpose of highlighting existing racial disparities in Cuba.

Managed, financed, trained and directed into battle by Frank Calzon’s subversive Free Cuba organization under the watchful eyes of US-AID, NED, IRI and the Cuban American National Foundation, these predominantly black men and women were recruited in an attempt to succeed where Miami lily-white counterrevolutionaries groups had failed.

Newly anointed leaders emerged out of nowhere and were hailed, failed, replaced or devoured in vicious verbal battles on Miami airwaves. Most of them today wander the streets of Miami demoralized, despondent, driving a cab or running a family cleaning business.

Presidents Barack Obama and Raul Castro shocked the world with their simultaneous announcement on December 17, 2014, that they had agreed to begin a process of normalizing relations between both countries. For Cubans this meant for the first time in half a century, they would be able to go to bed knowing they would not be strafed or bombed.

For the United States this was a first step forward to restore its shattered relation with Latin America and to clean up its tarnished image around the world, by proposing peace rather than war, hope rather than dope, harmony, love and development.

When this time bomb detonated in Miami, historic Cuba-haters assembled tens of defunct groups and urged them to rise and denounce Obama’s betrayal. The effect was immediate, when the handful of “Ladies in White” who marched regularly on Sunday’s on 5th Avenue in Havana, grew exponentially as if they had been fertilized with Miracle Grow and they metastasized across Cuba as any malignant tumor.

Leaders of these groups became frequent fliers into Miami where they delivered their activity report, picked-up instructions, visited Radio Marti and TV Marti, Radio Mambi and Mega TV to address their local and foreign constituency.

President Barack Obama’s difficult relations with an obstructionist Senate, a “do nothing Congress” where he was called a liar and endless accusations made of him being weak and giving everything to Cuba in exchange of nothing and questioning his birthplace, prompted him to prove otherwise to his constituency in the US.

His unfortunate decision to call upon the Cuban Government to improve their Human Rights record and the sensitive race-relation disparity publicly after hours of private conversations, raised his political standing in the US, but left a discording message among many in Cuba.

Supporting this hypothesis was his different approach to Argentina horrendous Human Rights violations during the military dictatorship of which he said nothing and chose to avoid a memorial march of the coup d’état, by relaxing in Bariloche.

Many Cubans were rightfully offended and others smelling blood in the water and not understanding American dirty politics, jumped on the bandwagon and stridently denounced Obama’s poor ethics for meddling into Cuba’s internal affairs.  Some, who had never asked for an apology from visiting dignitaries from Spain, England, France, Denmark or the Pope, demanded one from president Obama.

Fortunately, both Presidents Barack Obama and Raul Castro statesmanship have remained above the fray, their initial agreement seems to come out unscratched and they are prepared to deal with these unavoidable hurdles that are willing to obstruct the way to peace.

After half a century of a vicious, suffocating embargo that has caused so much hunger, suffering, sickness and deaths in Cuba, no one can expect that rectifying so much hostility, anger and distrust, will be a walk in the park. The United States image is severely tarnished around the world through GITMO, Abu Ghraib and others. Honesty, goodwill and the pursuit of a better world, demands that GITMO be returned to its legal owner, close that wound in the hearts of Cubans and in conjunction with the Cuban people, convert that heinous symbol of abuse, torture and death into a permanent memorial to peace, harmony and humanity.

Millions of narrow-minded, short-sighted individuals in the US, will question or oppose this necessary investment that will reverse decades of hate and destructive policies, while most of these individuals happily support spending billions of dollars in useless aircraft carriers, sophisticated fighter/bombers, maintenance of nuclear weapons and fleet, other weapons systems and armies in modern asymmetrical warfare.

If these thoughts would be considered and evaluated impartially, most would agree this could become a tremendous healing tool for millions of people and the only tool in our arsenal that can instill hope of a better life for millions of men, women and children living under injustices, warfare, hatred and the uncontrollable rise of extremism around the world. 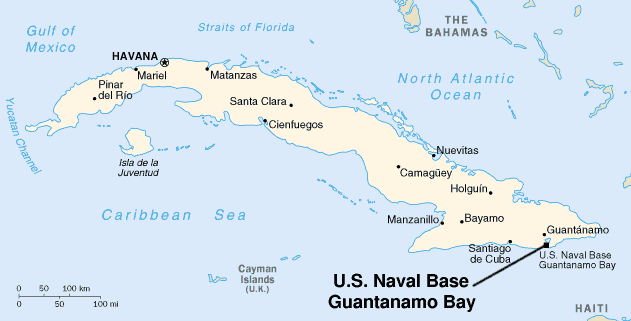 Here are some alternatives for the Cuban territory housing the Guantanamo Naval Base and other municipalities in the far eastern province of the island.

These and other reasons demand that President Barack Obama’s historic reopening and trip to Cuba should not fail.