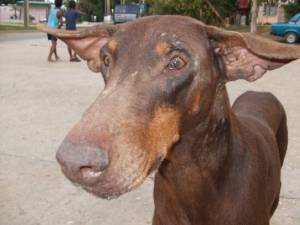 HAVANA TIMES — Since my early adolescence, I have been more aware about what goes on in the world around me. One of the things I’ve seen in Cuba is that human development has had a destructive impact on the lives of animals.

Centuries ago, animals did not rely on human beings for anything. They sought everything they needed to survive on their own and, before drying, procreated without anyone’s help.

Human kind is the most developed and intelligent mammal the world has known, but has misused its power and transformed the green, natural world into a gray, artificial desert. It has driven entire animal species to extinction and enslaved many others.

It is about the latter that I wish to talk about, for their pain often leaves me with a feeling of impotence, sadness at being unable to help the creatures who suffer before my eyes.

Human beings have upset the natural world, where a dog and a cat were once able to survive as wild animals. Even birds, whose magnificent wings, we would think, ought to place them beyond harm’s reach, are captured and confined in cages – sometimes even by children, who see this as a fun thing to do or a way to make a quick buck.

Finding less and less trees where they can build their nests, sometimes they naively construct their homes on electrical posts. I’ve seen workers from the electrical company rip out the nests, sometimes with eggs and even chicks inside them, and fling them away with utter indifference.

To animals, we are like gods they appeal to in search of protection. If we deny them this protection, where are they to go, what are they to do? They are incapable of surviving, on their own, in the world that we’ve created.

There isn’t a day I go out that I don’t come across a stray dog. Many a time, I can tell they’ve just been abandoned. When I see the sadness in their eyes, it’s hard for me to understand how someone was capable of such cruelty. “I hope they suffer too”, I often think to myself.

But the helpless creature doesn’t entertain such thoughts. It begins to follow a passerby with renewed energy, to trail someone who either ignores it or scares it away.

I am shocked at how cruel the young generations have become. I know teenagers who amuse themselves by throwing stones at cats. There are children and teenagers who proudly tell you they go out at night to kill cats.

I used to ask myself why human beings fight one another so senselessly, what drove people to commit murder. Today, I saw that the whole thing is very simple.

If people have the nerve, or, better, if people lack the sensibility and compassion, to be able to get a power-kick out of torturing and even killing a creature that is so defenseless it can’t even plead for help, let alone flee, then what could possibly stop them from killing a fellow human being, a creature that has, after all, demonstrated that it is more of an animal than animals themselves, who kill only in order to survive, never for the pleasure of hurting another?

4 thoughts on “Who Are the True Animals?”