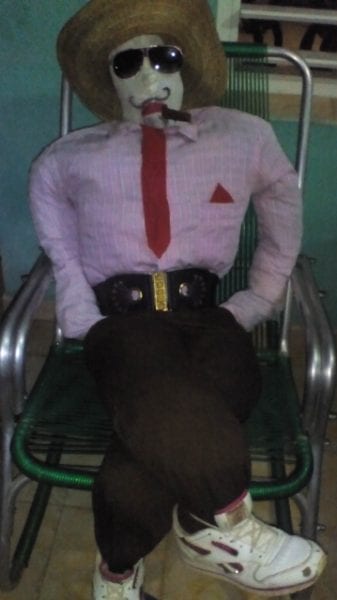 HAVANA TIMES — In Cuba, spending Christmas and new year’s eve with your family still continues to be a beautiful tradition. Even more so if you spend it eating roast pork, rice and beans, cassava with sauce, mixed salad and bitter orange peel dessert. But, not all families can pay for the great “luxury” that these simple delicacies have become.

In Cuba’s East, (I don’t know about the rest of the island) before the crisis that came with the Revolution, neighbors and relatives would go from home to home and everyone would have a bit of each other’s suckling pig and share drinks. Generally-speaking, aguardiente would liven up people’s spirits, as well as cider, as the symbiosis of Creole and Spanish elements.

According to what our elders tell us, there wasn’t a single home, no matter how poor it was, where roast pork was missing. Cuba’s problems were very different back then. The party used to start on Christmas eve, December 24th, in the run-up to Jesus’ symbolic birthday (Christmas), which starts with Easter and ends with Three Kings day (Epiphany). As part of our Spanish inheritance, grapes, apples and Turron from Alicante were never missing either, whether this was made with sesame seeds or almonds, alongside Seville bitter orange peel preserve.

However, according to what we are told, this holiday was canceled during the sugar harvest in 1970 because it coincided with this extremely important economic activity, which needed mobilizing. The holiday was moved to July 26th, in honor of the attack on the 1953 Moncada barracks. Transferring this holiday to this date also saved Cuba millions of dollars as it avoided traditional imports from Spain.

Instead, in parallel with the negative stigma that religion and religious holidays gained, it led to very few people celebrating Christmas Eve. But, this holiday has slowly been recovered, especially after Pope John Paul II’s visit in 1998, when December 25th was declared a national holiday.

We only had the end of year celebration intact, maybe supported by the fact that, “coincidentally”, the leader of the Revolution decided that January 1st would be the day of his victory, as this was the day that Batista fled the country in 1959 and Fidel occupied Santiago de Cuba. It could have perfectly been any other day, because there were many events, not just one, which determined the Revolution’s victory. But, this is how the government has combined the New Year celebration with that of the Victory of the Revolution. Something similar was done in Rome with December 25th, when Christianity was officially adopted: they transformed the holiday.

January 1st is a national holiday for this reason, however, it’s very rare to hear someone saying that they are celebrating the victory of the Revolution, not even the CDRs hold a political ceremony or something along those lines. It would pass by unnoticed if it weren’t for the connotations that are given on national TV, radio and in the press. And even yet, the Cuban people don’t echo this. Everybody greets each other before new year with a “happy end of the year” and then afterwards with a “happy new year”. A beautiful gesture which expresses hope, at least symbolically.

However, it’s sad to spend December 31st here in Cuba without a piece of roast pork, unless you are vegetarian of course. A pound costs 35 pesos here in Mayari, cassava costs 3 pesos per pound, cucumber costs 3, tomatoes 10 and 4 lettuce heads cost 5 pesos. The cheapest beer costs 18 pesos, a bottle of homemade wine costs 25 and rum costs 80 pesos. 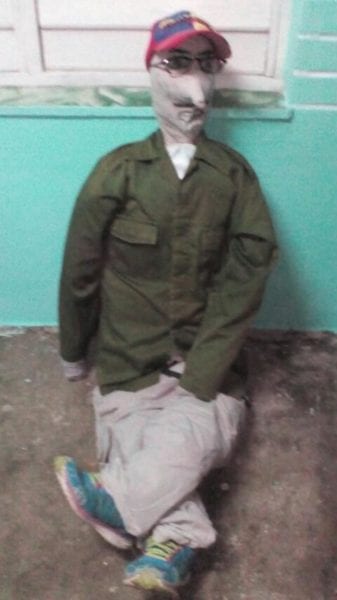 Of course, in the shadow of Havana’s astronomic prices, these seem cheap, but here where the economy hasn’t been developed as much, it is an odyssey to prepare a feast, or worse still. You need at least 500 pesos for a simple dinner for 4 people, which is approximately 20 USD: any professional’s entire monthly income.

Now, let’s talk about the things that don’t cost anything in this tradition. In the West of the island, people normally throw out a bucket of water, as a symbol of purification. However, this isn’t common practice here in the Oriente province, at least not in Mayari. There are people who, wanting to travel, pack a suitcase and walk around the block as a good omen. And in recent years, many homes make a doll with old clothes starting on Christmas Eve, which they call the name of the year that is ending, and they then burn this at midnight on the 31st.

This new part of the tradition may have originated from the widespread custom decades ago when the Revolution’s mass organizations used to burn similar dolls with the name of the US president in office at that particular time.

But, the most beautiful thing about this holiday continues to be spending it with your family and using this day as an excuse to all come together and have a good time, sharing the feast you can put together. Everyone always makes an effort and we all try to have the best time we can. People brim with sincere happiness, forgetting their hardships at times, going out onto the street to hug each other, kiss each other and wish each other a better year. I hope so. Happy new year!