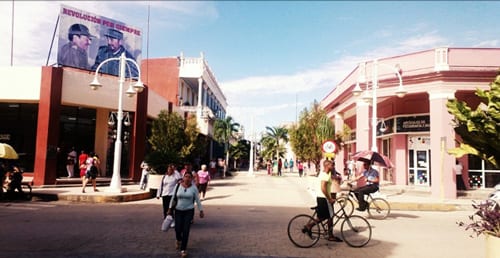 HAVANA TIMES — Ciego de Avila, one of Cuba’s central provinces, is located around 400 kilometers south-east of Havana. In recent years, the city (currently reporting 100,000 inhabitants) has witnessed notable tourism development, chiefly due to the hotel infrastructure created in its north-laying keys.

Cayo Coco, Cayo Guillermo and other keys that make up the Jardines del Rey archipelago are excellent sun and sea destinations for Cuban and foreign visitors.

Ciego de Avila is also the country’s largest grower of pineapples and other fruits, such as guava, mango and coconut.

In addition, the province is home to Cuba’s national baseball champion and the team that is represent the country at the Caribbean Series in the first days of February next year. The photos below were taken in the capital’s downtown area, chiefly in the pedestrian boulevard.

2 thoughts on “A Visit to Ciego de Avila, Cuba”