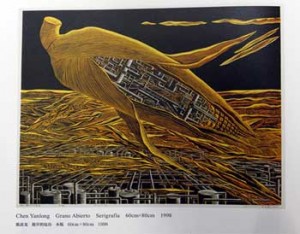 HAVANA TIMES, April 4 — For the first time in Havana, through the exhibit “Prints of the New China” (1949-2009), one can appreciate the use of ancient printing techniques.

Curated by Shi Lan and Cheng RongYi, the display offers a long aesthetic march over the past six decades. It has come to Cuba thanks to the Art of Hunan publishing house, based in the province of the same name located in southeast China.

The magnificent collection will be on exhibit at the San Francisco de Asis Convent in the historic Old Havana district until April 14.

In the Salon Blanco (the White Room) of the convent, 60 prints by 48 important artists of the New China are on display. These date back as far as October 1, 1949 — the official date of the founding of the People’s Republic of China, led by the Communist Party — and span up until more recent times (2009).

The exhibition is sponsored by the Cuban Ministry of Culture, the Office of the Historian of the City (Havana), in addition to the Art of Hunan Publishing House, the Beijing Hexagon Art Center and the St. Francis de Assisi Convent. The display also has the support of the Casa de Asia and the Meilun Museum.

For more information or to confirm showing times, one can telephone the St. Francis de Assisi Convent at 862-9683.