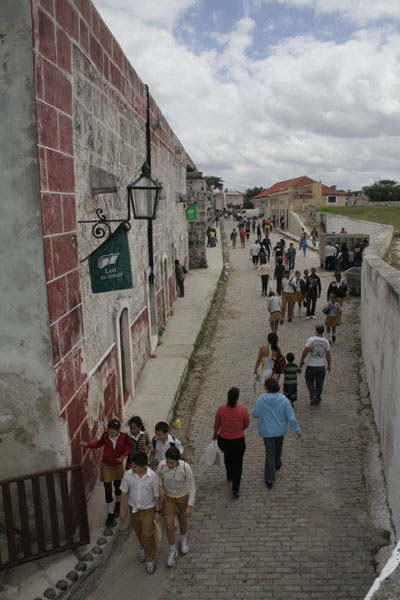 HAVANA TIMES, Feb. 21 — The Morro Cabaña colonial fortress was the main venue for this year’s Havana International Book Fair that concluded its Havana dates on Sunday.

In its 20th edition, the fair was dedicated to the cultures of the member-countries of the Bolivarian Alternative for the Americas (ALBA).  Pavilion Cuba and the Boyero Agricultural and Livestock Fairgrounds served as sub-venues.

Starting on Wednesday, February 23, the Book Fair opens in the different western provinces and the Isle of Youth of Cuba to be followed by the central and lastly the eastern provinces until it concludes on March 6th.

The principal sub-venue of the Book Fair in the capital was Pavilion Cuba, located on la Rampa (“The Ramp”), on sloping 23rd Street in the Vedado neighborhood.  This same facility is the headquarters of the Asociacion Hermanos Saiz, an organization of young artists from around the entire country.

On this occasion, this space for exhibitions and cultural activities was dedicated mainly to children, and numerous activities were organized for them, in addition to the sale of children’s literature.

One of the artists who stirred the enthusiasm of the droves of kids was the mime Eddy Santiesteban.  In addition, there was a group of giant marionettes, whose puppeteers — as volunteer community work — are devoted to taking their art to all the neighborhoods in Havana and to children’s hospitals, among other places.

Among the most important children’s books, which were widely bought, was The Little Prince, by Antoine de Saint-Exupery, as well as Habia una vez, (Once upon a time) by Herminio Almendros.  Also well received were numbers of coloring books.