HAVANA TIMES, March 2 — The new San Carlos y San Ambrosio Seminary was inaugurated barely four months ago. There are few photos of it, perhaps because it is so out of the way on the outskirts of the city. In any case, this report provides photos of the interior and external of the facility, as well as information related to the institution.

The seminary was inaugurated on November 3, 2010. Its construction was carried out on land controlled by the Archdiocese of Havana, about 10 miles to the southeast of the city. According to a statement by Cardinal Jaime Ortega Alamino during the inauguration, this will be “an appropriate space for prayer, study and silence on the part of those who are preparing for the priesthood in Cuba.”

The historic site of the school, situated in the tourist center of Old Havana, didn’t provide the conditions of isolation necessary for this type of facility. In addition, according to one seminarian, the students lived in overcrowded conditions at the old seminary.

The current building area is close to 6,000 square meters, with a capacity to house 100 seminarians. The building presently serves 44 of the 66 students who are studying in the entire country today. In the San Basilio Magno Seminary, in Santiago de Cuba reside 17 students, and another five in the Propedeutico at the Archdiocese of Camaguey.

The design includes a main building with an entrance way, a lobby, a reception hall, a main classroom, several smaller classrooms, a library, an infirmary and offices. The chapel occupies a central focus in the architectural concept.

There are four buildings for theology and four for philosophy, along with classrooms and bedrooms on the lower level and bedrooms in the upper level. For the philosophy seminarians (those in their first four years at the seminary) individual rooms were built, with a bathroom serving each two rooms. The theology seminarians (those in the last four years) will have individual rooms, each with their own bathroom.

There exists a services building with a basement and two upper floors. Located there is the dining room, recreation areas and the dormitory for beginning seminarians. To this was added the construction of 10 rooms for teachers, and a residence for nuns (this is already occupied by Franciscan Sisters of San Jorge, who assist with the operation of the seminary).

The buildings are connected to each other to prevent rain from bothering people when moving between them. Still under construction is the sports area, which will have two ball courts. In the meantime the seminarians have set up their own rudimentary gym. There exits a plan to build a swimming pool, though this is on hold due to budgetary limitations.

Areas are being prepared with fruit-bearing trees and a vegetable garden, as well as for the breeding of farmyard birds, pigs and other animals for consumption by the seminarians, teachers and service personnel.

From 2009 to 2010, the number of seminarians in the whole country increased by 16.2 percent. It’s interesting to know that 98 percent of the students are Catholic converts, meaning that they don’t come from families with extensive religious backgrounds. 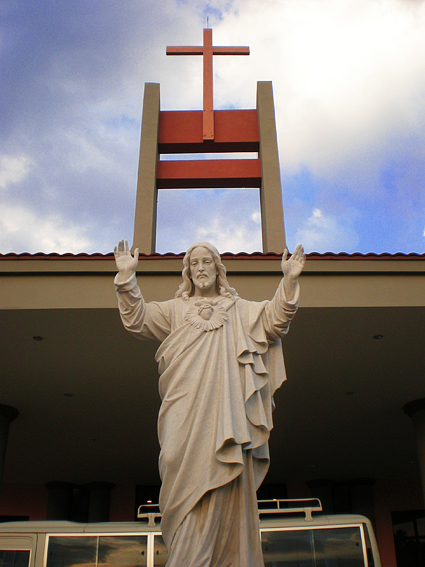 In the past decade, the number of ordinations was barely 6.2 percent of the initial enrollment in seminaries of the country. The statistic is below the average at the world level, where perseverance stands at 10 percent.

The 2004-2005 school year experienced the greatest enrollment at San Carlos, with 104 students; while the smallest figure corresponds to the current class, with only 44 youths. This implies a rate of one seminarian for each 250,000 Catholics in the Archdiocese of Havana.

A substantial advantage of the new school is that seminarians will be able to obtain the official degree of Bachelors of Theology because the new center is affiliated with the Gregorian University of Rome.

2 thoughts on “Cuba Has a New Catholic Seminary”