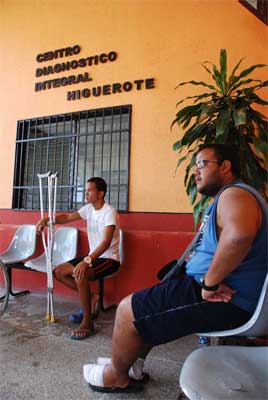 HAVANA TIMES — This wasn’t the first time that Virgen talked to me about when she visited Cuba. About 12 years ago she went to my country accompanying her sister who was receiving medical treatment.

But it wasn’t only in Havana where Virgen first befriended Cuban doctors (we know that Venezuela is now full of our physicians).

Initially, like most Venezuelans, Virgen didn’t have much confidence in Cuban medicine. However, one morning in a private clinic she found a magazine — published outside of Venezuela — in which she read a report about health care professionals in Cuba and their work in different parts of the world.

The article wasn’t written by Chavez supporters or anything like that. Virgen told me that she ended up “borrowing” the magazine to show the touching and informative story to all of her friends.

This was how she got to know the first Cuban doctor who was sent to work in the area where she lived. He was one of the first to serve in Caracas.

Talking with Armando, she learned of his anguish.

He had never had to treat a gunshot wound, his roommates weren’t the best people in the world, his nights — spent locked in and away from his family — were filled with homesickness, while sometimes gunshots ricocheted off the wall in his house only to leave him a nervous wreck.

Yet despite all that, Armando was determined to do his job as he had sworn to under the medical code and to go even beyond what was required. 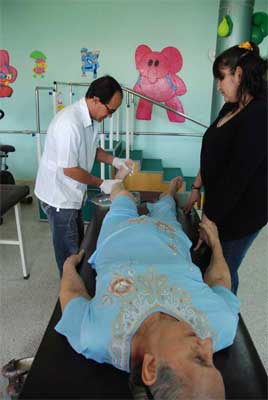 This was how Virgen got to meet other health care professionals, until she got the opportunity to travel to Cuba, accompanying her sister who was ill with a serious heart disease.

At the La Pradera Clinic (for foreigners), her sister as a patient and she as a companion received the best of care. But Virgen wasn’t satisfied with the formal “doctor-patient relationship,” so she became friends with most of the staff there.

She also made friends with many other patients and would often go with them visiting different parts of Havana. This was how she first saw and took pictures of the famous “Camels” (the double-humped buses in the capital), collapsing tenements, La Bodeguita del Medio bar/restaurant, some beaches on the east and west sides of town, and became acquainted with a little more of “Cuban life.”

She learned that the food they received at La Pradera was far more than what “ordinary” Cubans usually ate. And also she found out that the doctors caring for her sister earned paltry salaries – though better than the professionals at other Cuban hospitals.

She learned to make “panetelas” — here they’re called “tortas” (cake) — in pressure cookers, which left her totally impressed. In this way she was getting to know our other side as “inventors,” which is typical of those who have no other choice but to “invent” in order to make do.

Since then, Virgen has continued to recognize the kindness and wisdom of the doctors from my country, but over the last couple of years they haven’t been the same, she confessed. 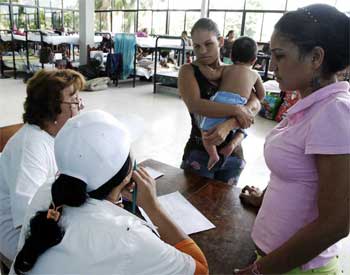 “They’ve been infected by the Venezuelan doctors.” That was her explanation in brief.

She notes: “How is it that over there in Cuba we can’t dream of maintaining a cell phone, while here in Venezuela the doctors spend all their time glued to the devices?”  She went on to add: “Plus, whenever I go for an examination now, they hardly look at me; their ears and energy are focused on those damned Nokias. And most of them will simply prescribe the same thing: Paracetamol and Piroxicam.

She knows that these drugs are manufactured in Cuba, where people often have a hard time finding them in pharmacies, and she’s surprised that they don’t provide a greater range of medicine throughout Venezuela’s system of Comprehensive Diagnostic Centers CDI.

She added, “A few years ago the Cuban doctors who attended our area did regular “field work,” meaning that he or she would go see patients who were hypertensive, pregnant, diabetic or whatever on a regular basis. Now — at least in this area — it’s difficult to even find them posting up public service health care messages.

My neighbor even complained saying: “One night when my daughter had a high fever, I took her to see the doctor who was serving us. But she didn’t even want to open the door; she was upset because it was her break time.”

Virgen knows that these aren’t isolated cases, though nor is this an attempt to generalize.

“Cuban doctors are losing their innocence, they’re becoming Venezuelanized,” she repeated at the end, longing for those physicians who she met at the beginning of “Mission Barrio Adentro*.

One thought on “Cuban Doctors Aren’t the Same Anymore”