HAVANA TIMES — When I heard about a blues concert dedicated to the Cuban Five scheduled to be held at the Cultural Center in Plaza, Vedado, I asked myself: Why not dedicate it to all prisoners around the world, to every human being who’s suffering because their freedom has been denied by another being human? But it wasn’t my concert.

Bobby Carcasses had told the press about his desire to “make our music vibrate with a message of love and a sense of justice, so that our five fighters for peace might return to their homes and families.”

I can’t deny that his offer was tempting: we would have the chance to spend five uninterrupted hours listening to the blues.

The “showman of Cuba,” on this occasion seated at the piano and accompanied on trumpet by Cesar Lopez, opened the show with an original composition: “Blues for the Five.” Contrary to how this genre is almost always characterized, there wasn’t sadness or melancholy in the lyrics:

Then followed a long list of Cuban jazz greats, making the participation great and diverse. We were able to hear the music of experienced performers such as Enrique Pla, Oscar Valdes, Pancho Terry and Giraldo Piloto, as well as “Afrojazz” (the group that accompanied Bobby) and the Jorge Varona Band directed by Rey Montesinos.

Also shining were the young and talented Yasek Manzano, Alejandro Falcon, Kali Rodriguez and students from the Amadeo Roldan Conservatory, in addition to less known groups such as Eclipse Cubano, Kubans Blues and Saxofilia.

Pablo Menendez gave a special touch to the electric guitar, William Torres took us back to the famous old school jazz clubs with his scat, and “Robertico” Carcasses showcased his “Mambo Jam.” 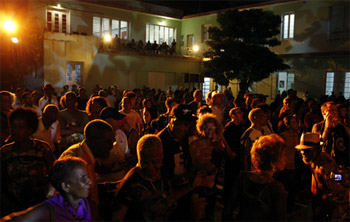 Up to that point it was great, with stellar performers, but the success of a concert also depends on its technology, and those of us who were there know that the audio was not up to par, as Bobby interrupted the music more than once until they finally fixed the problems.

Another detail that marred the evening was the lack of chairs. For the youth this didn’t present a problem, many of us simply lounged on the cement floor. Nevertheless, how could one not have noted that among the participants were the elderly Santa Amalia dancers, who transported us with their dancing that harkened back in the streets of the birthplace of jazz – deploying all of their energy and vitality.

Bobby Carcasses, always sincere, publicly apologized and explained that he didn’t agree with people having to spend five hours standing: “They promised me chairs, but you know how things are here.”

Despite that, we spent a good time listening to blues. Through the songs, coexisting in the same space, were the spirits of Miles Davis, Joe Williams and Benny More.