HAVANA TIMES — With its large gardens and balconies a stone’s throw from the sea, the Quinta de Santa Elena villa is the most attractive building by the shores of the Yayabo river, in central Cuba’s city of Sancti Spiritus.

Since its construction in 1858, it has been the residence of wealthy families, an old people’s home, a whorehouse, a working-class tenement and a restaurant.

In 2010, when the unexpected restoration of Sancti Spiritus’ old town was set in motion, the villa was placed in the hands of the Ministry of Culture and was thus able to skirt the destiny of most of the city’s distinctive buildings, which have been converted into hard-currency stores. 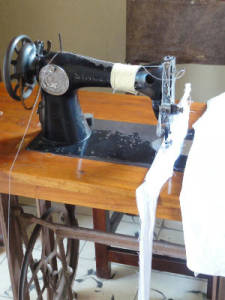 The country villa reopened its doors to the public on June 4, 2012. Today, it is home to the Guayabera Museum, the island’s only museum devoted to this traditional garment.

Some accounts claim that the garment (“guayabera” or “yayabera”) first came into existence in Sancti Spiritus in 1709, fruit of the ingenuity of a woman from Andalusia named Encarnacion.

The guayabera, also known as the “habanera” in Latin America, was originally a long-sleeved shirt made of white fabric. It had four pockets and five vertical, decorative hems (two at the front and three at the back). The garment was finished with 27 nacre buttons.

The shirt, which was originally worn exclusively by people in Cuba’s central countryside, arrived in Havana in the 1940s. There, combining the shirt with a Panama hat and butterfly bow became a popular fashion.

As of the 1960s, guayabera shirts began to be worn less and less and their design changed considerably. At the time, it began to be made out of other fabrics (such as polyester) and to be fitted with regular plastic buttons, which were not exclusively white. 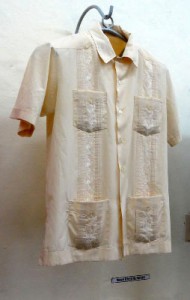 Opened over a year ago, the Guayabera Museum gathers 180 garments. Some noteworthy pieces are the shirts worn by such cultural luminaries as Gabriel Garcia Marquez, Miguel Angel Asturias and Alicia Alonso.

The largest guayabera shirt yet to be produced (five meters long and three meters wide) is also on display at the museum.

One of the Museum’s interesting offers is to be found at its store, “La Alforza”, where one can get a guayabera shirt, tailored to one’s measurements, for only 368 Cuban pesos.

This price is competitive when we recall that the cheapest Compay Segundo shirts, produced and sold at State stores, run at 30 CUC.

Admission is five Cuban pesos. A guide leads the tour through the different exhibits, which are changed every 3 months. Currently, the guayaberas of some of the members of the rebel 26th of July Movement are on display.

This self-financed cultural project, though modest, aims to become one of Sancti Spiritus’ main attractions.

One thought on “The Guayabera Museum in Sancti Spiritus”