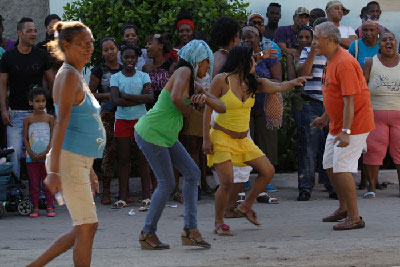 HAVANA TIMES — What is today the municipality of Cerro was first founded as a township 424 years ago. In recent decades a Culture Week is held to celebrate the anniversary. The 34th such event, dedicated to the popular and traditional dances, took place from May 5-11.

The day Havana Times was present to capture some of the partying, the musical group Clave y Guaguancó had the youth dancing, and the not so young as well.

The Cerro Culture Week was first held in 1979, in the month of October, to commemorate one of the most popular traditions of local heritage: the famous Pilar Fairs, which were developed in the first decades of the nineteenth century around the parish of Pilar.

Starting in 1995 the week was moved to May, the anniversary of Cerro, as declared by its City Council.