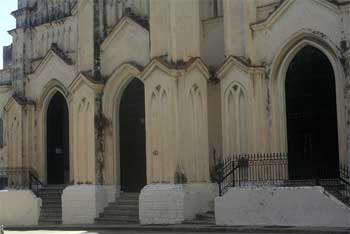 HAVANA TIMES, March 18 — Soon the Pope will make a pastoral visit to Cuba to mark the 400th anniversary of the discovery of the Virgen de la Caridad del Cobre figurine and to help reaffirm the Catholic faith here on the island.

Among the Cuban people exists a high degree of religious ecumenism, ranging from Catholicism and all of the Protestant denominations to religions of African origin whose believers worship their deities or “Orishas.”

However the Catholic religion has always had considerable presence here.

This is evidenced by the many Catholic churches in the country, particularly in Havana, where some of these houses of worship are works of art. They have been constructed in a number of different architectural styles and have distinct interior designs.

One example of this is the parish of Santo Angel Custodio (the Holy Guardian Angel Parish), located at the corner of Compostela and Cuarteles streets in Old Havana, and known in the area as the “Loma del Angel” (Angel’s Hill). 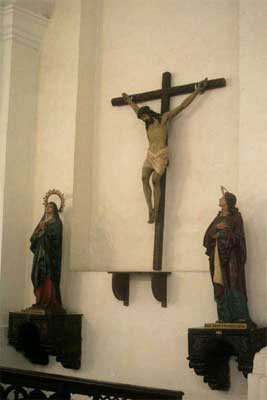 This sanctuary was originally built in 1690 as a chapel consecrated to the Santo Angel Custodio, an adjunct to the principal parish that existed at that time. Back then is was a small nave lacking in resources, though later it underwent modifications and expansion, in 1704 and 1815.

In the novel Cecilia Valdes, Cirilo Villaverde described how in the first quarter of the nineteenth century, the church still had only a single nave.

In 1844 a hurricane completely destroyed the building but it was rebuilt by Bishop Fleix y Solans. However, the most important reconstruction effort — which gave it the look that it presents today — was conducted between 1866 and 1870 under the Bishop of Havana, Friar Jacinto Maria Martinez Saez.

With its Gothic Revival style, it is listed as one of the finest examples of a nineteenth-century religious building in the city of Havana today.

Its beautiful lower-level stained glass windows shown here were crafted in Barcelona, while the upper-level ones were fashioned in Munich.

This church also has the privilege of having been the site of the baptisms of two important Cuban patriots: Father Felix Varela, in 1788; and Jose Marti, in 1853. Felix Varela himself delivered a sermon in this church in October 1814 on the occasion of the moving of the Santisimo Sacramento (the Blessed Sacrament) to this building.