HAVANA TIMES, Oct 11 – After a three year absence, Franco-Spanish singer Manu Chao returned to Cuba, this time to sing in dedication to legendary guerilla fighter Che Guevara.  The first concert took place on Friday in front of the expansive main stairway of the University of Havana, while the second and final concert will be held in Santa Clara.

Although it was not as moving as Chao’s March 2006 performance in Havana’s Jose Marti Anti-imperialist Forum, many students from a number of countries turned out to hear him.

Christian, a Uruguayan physical education student, arrived early to the university. “I couldn’t miss this; the other time he came I couldn’t make it.  I thought this one was a fantastic concert.  Anything dedicated to Che is worthwhile,” he said.

Perched on the surrounding walls or standing up, the throng of people sang along to “Clandestino,” the singer’s emblematic theme.

“I came for Manu Chao; I like his songs a lot.  I’ve been following him since he was with the group Mano Negra.  Every time he comes I’ll be there to hear him.  The last time he came with a group and performed at the Anti-Imperialist Bandstand.  Today was lighter but more serious, though the lyrics and the music were the same.  I liked it just as much,” said Mariela, 40.

It was not unusual that Manu Chao chose to sing of the social symbol that Che Guevara has become.  His songs tackle sensitive issues: immigration, discrimination, love… and they carry a progressive message.

The musician is an advocate of social justice, protesting the repression of campesinos in Atenco, Mexico, which resulted in the death of several people and the incarceration of 115 men, or speaking out in support of ending the blockade of Cuba.  During the performance he dedicated the song “Alas Rotas” (Broken Wings) to the enemies of the Cuban Revolution.

From the beginning of the concert, Polish designer Jacek Wozniak (the illustrator of all of Manu Chao’s CD covers) and several young Cuban artists simultaneously painted four murals representing Che. 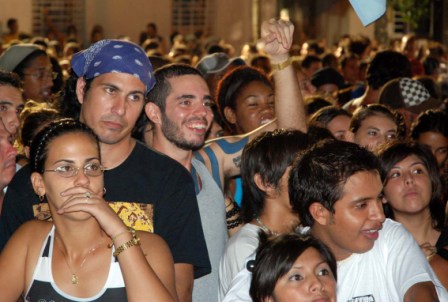 The university stairway accommodated the mass of people, but one could sense a lack of something important.  In the 1980s, when trova musicians considered this an excellent venue, a more harmonious atmosphere was breathed by the public.

Now, with everyone having their own point of view, music-by whomever or dedicated to whomever-does not succeed at truly uniting people.  “It’s not the same as before,” said 51-year-old Alberto with certain sadness. He recalled the epoch of concerts by the group Moncada, Silvio Rodriguez and Pablo Milanes.

In any case, with his varied style-influenced by reggae, the blues, rock and others-Manu Chao was eagerly awaited and enjoyed by hundreds of Cubans.