HAVANA TIMES — Those of us who attended the performance staged at the Raquel Revuelta theatre on June 1st had the rare privilege of enjoying Marianela Boan’s poetry, which has returned to the Havana stage after an 8-year artistic hiatus.

The artist participated in this year’s Cuba Baila Dance Festival as the director of the National Contemporary Dance Company of the Dominican Republic. Caribe Deluxe was the name of the piece this ensemble performed at the festival, which gathered choreographers and other artists from the Caribbean region.

As part of this festival, organized by the Artistic Development Department of Cuba’s National Council for the Performance Arts, with the support of the French Institute and the Embassy of France in Cuba, the Mella Theatre, Tito Junco Performance Hall, Raquel Revuelta Theatre and Havana Dance Center became a meeting ground for dancers of different generations and styles from May 28th to June 2nd. Centered on Caribbean dance traditions, the gathering saw the participation of performers from Guadalupe, Martinique, the Dominican Republic and the United Kingdom.

This set the stage for the return of Boan, as some affectionately call her.

Full of life, Boan, now at the height of her artistic maturity, graced the stage of the Raquel Revuelta with her piece Caribe Deluxe. Many may remember her as the young, talented performer who, after a fruitful partnership with Ramiro Guerra, decided to found her own dance company.

This decision, made in 1988, would give us Danza Abierta, a company that sought to distance itself from the typecasting and blinkered mindset that prevailed in the field at the time. In the course of 15 years, dance numbers such as “The Fish in the Tower Swims Across the Asphalt” (“El pez de la torre nada en el asfalto”), “The Path and the Tree” (“El camino y el arbol”) and “Chorus Perpetus” would earn Marianela Boan, a choreographer who draws from diverse dance and theatre traditions and from all manner of innovative schools, a solid reputation among theatre-goers.

The festival also afforded the founder of Danza Abierta an opportunity to meet with its current troupe, 25 years after the creation of the company. The charm of numbers like “Malson” and “Show Rum” were thus fused to the seductive atmosphere of Caribe Deluxe, making us ask ourselves how much of Boan still lingers in Danza Abierta and how much of this company lives on in the performer’s new project. 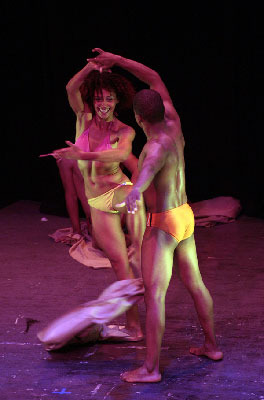 Caribe Deluxe, and eminently Caribbean choreography, is performed by a total of six dancers.

Through a playful use of colorful loincloths, the performers weave a story riven by violent tales of passion that recreate Caribbean advertisements.

Innovative combinations of expressive elements are seen throughout the performance. The music, composed and performed by Fabrizio Duran, accompanies the precise body language of the dancers, which enters into an intimate dialogue with different genres, from electronic music to bachata.

Rather than an unequivocally Dominican identity, the unflinching display of these bodies lays bare the spirit of the Caribbean, which springs forth from the vulnerability of the characters, the violence to which they are subjected in a region which is at once a paradisiacal tourist get-away and a place of extreme poverty.

Aware of these contrasts, Boan presents us a story driven by strong contradictions. Caribe Deluxe drives these contrasts home in its dance numbers and through its music, insisting on them almost to the point of tearing apart the story’s narrative fabric.

The public gave the piece a heart-felt ovation, grateful for its inclusion in this year’s Cuba Baila Festival. The intricate interweaving of different languages made the performance an extremely enjoyable experience for all of us who attended the show, staged only once at the Raquel Revuelta Theatre.

With more shows, the dancers may have been able to enter into a more intimate relationship with the audience. That said, our re-encounter with Marianela Boan at the Havana stage will live on in our hearts and memory.