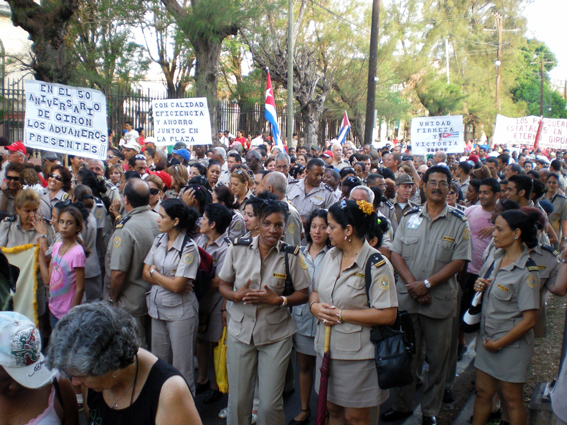 HAVANA TIMES, April 16 — After having heard about it for more than a month, droves of Cubans turned out on Saturday (April 16) to the Jose Marti Square for the government-convened parade in celebration of the 1961 Bay of Pigs victory.

As is always done in organizing this type of event, significant resources were expended, especially if we consider the several weeks of preparation, the large number of people and institutions involved, the transportation requirements and the efforts to ensure the parade’s success.

Moreover, on this occasion it included a large number of armaments, or “technology,” which was the term used to refer to the army tanks, combat airplanes, helicopters, and other vehicles that were unknown to me.

The attempted invasion from at the Bay of Pigs and the defeat suffered by the mercenaries’ forces is a true source of national pride. Nonetheless, one has to ask if we are in any condition to engage in demonstrations of force. It would be very interesting to find out the true reason the country’s leadership decided to organize a “military review” (another euphemism). 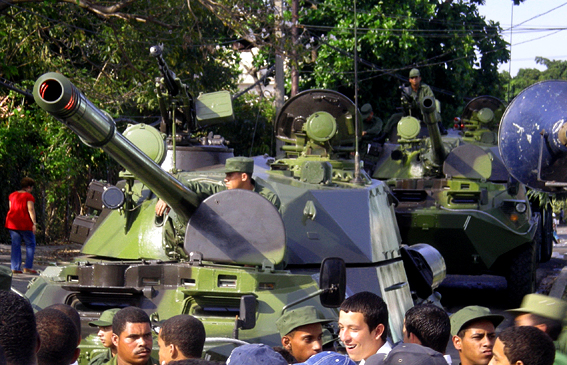 Many believe the motive is closely linked to the holding of the 6th Congress of the Communist Party, especially given the little support shown for the “Guidelines” [the document outlining proposed reforms] in the preceding national discussion.

They could have just as easily waited two weeks to hold the parade on May Day, as is now traditional. In that way, the Cuban economy would have saved important sums of money. But by that time the congress would have already been held, so this parade may perhaps serve to demonstrate the “people’s support” for what is approved there.

But what’s certain is that participation this time was not as massive as on other occasions. In my trip from the far-western San Agustin neighborhood to the central Vedado district, I counted more than 10 large buses that were completely empty, all waiting to take people to the square.

The buses with passengers were also only lightly filled. Almost no one was standing (in my bus there were only five people on their feet), and no one uttered a single word in reference to the march. Any issue at all seemed more important than to talking about the Bay of Pigs, the socialist character of the revolution, or anything similar. 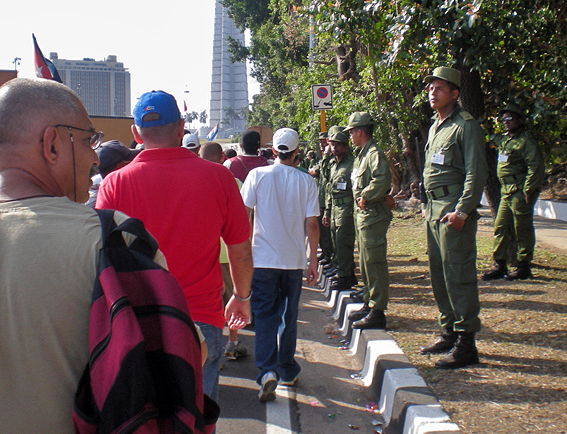 Those who watched the proceedings on television told me that the audio was terrible during the parade of mounted troops. Honestly though, I didn’t notice because you could hardly hear anything. In fact, I didn’t see or even know that horses had been involved.

I was also told that the “modernized” tanks were “guarded” by children dressed in their school uniforms, which to some spectators was a quite strong and unpleasant image.

Those of us attending the march were prohibited from getting near the tanks, a good idea, so most people didn’t see much of anything. Luckily, during the procession I glimpsed some of the artifacts positioned to one side and was able to take the photos that I’m publishing here.

As I got closer with my camera, it was kind of amusing how they told me I couldn’t take photos (but as you can see I disobeyed, as did everyone who went over into that area). I think that if the organizers don’t want people to take photos, then they should either remove the “technology,” hide it or make it disappear.

In short, I came out with a few shots of what I saw, some which were frankly comical. Other photos of happy faces, flags in the air, and the emotion-filled multitudes can be found on in all the official Cuban websites.