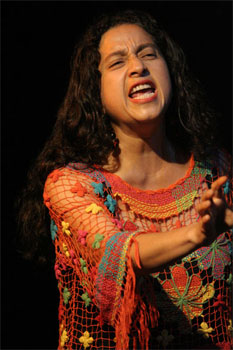 HAVANA TIMES — The Seventh Festival of Oral Storytelling, held in Havana from March 18 to 24 at the Bertolt Brecht Cultural Center and the Adolfo Llaurado Theater, enjoyed the participation of Cuban narrators along with ones from Argentina, Chile, Mexico, Peru, Uruguay, Venezuela and Senegal.

Twenty foreign storytellers and more than sixty Cuban narrators charmed audiences in other locations such as the Ruben Martinez Villena Library in Old Havana, La Moderna Poesia bookstore and the Alliance Francaise.

Storytelling relies on the expressive resources of the narrator, such as their voice, tones of speech and gestures, with which they establishes their relationships with the spectators.

This festival has taken place in Cuba since 2006 to celebrate the beginning of spring, and has been sponsored by the “NarrArte” program (directed by Mayra Navarro), together with the Gran Teatro de Habana.