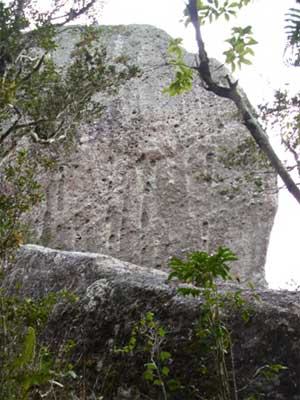 HAVANA TIMES, April 8 — Formed most likely from a volcanic rupture, the “Gran Piedra” (the Grand Stone) is an enormous rock measuring 51 yards long and 25 to 30 yards wide. With a calculated weight of 63,000 tons, this boulder is situated on the summit of a mountain rising 1,225 meters above sea level. The site is located 25 kilometers (16 miles) southeast from the city of Santiago de Cuba.

The legends of its origin include everything from it having formed with the impact of a meteorite that fell to the earth millions of years ago to what are believed more accurate versions that consider its birth due to the explosion of an underwater volcano.

This unique site is now registered as a national monument.

The gigantic stone mass was perhaps a witness to the volcanism of the Paleocene, just like all of the geology of the Sierra Maestra Mountains, where strata of this type of rock are present composed of layers of volcanic lava. This mass is famous not only within the frontiers of the island, but also all across the Caribbean since it is the largest such stone in the entire region.

It is a natural watch tower from where the whole mountain range of the Sierra Maestra can be observed; likewise, almost the entire southeastern coast can be seen from here. Locals swear that on a clear night one can even see the gleam of lights coming from the neighboring Republic of Haiti. 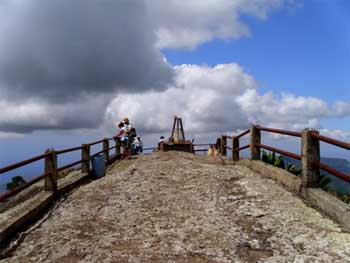 In its surroundings one can enjoy unique flora consisting of 222 varieties of ferns, as well as a total of 352 types of orchids, eucalyptuses, maestrense pines, cubenses, cypresses and a variety of fruit-bearing trees –among them peaches, as odd as that might seem.

The fauna of the Gran Pierdra is also one of its strongest attractions. Around the great mass flutter carpenter birds, royal thrushes, cartacubas, sparrow hawks, torcazas and mays, all led by our national bird: the tocororo.

Only a half mile away, one can find the area’s Botanical Garden, where species such as the bird of the paradise, dahlias, magnolias and other flowers are raised in a singular manner as they take advantage of the microclimate that prevails in the area.

The constant fog and the ever-damp moss ground-coverings typically pervade the mystery and enigma of this setting, one whose geo-morphological, ecological, climatological and topographical particularities lend it great importance for ecological tourism.

The highlight of the visit is the exciting adventure of climbing, wrapped in the dense fog, 452 steps up and accompanied by a dense vegetation of ferns and other species that perfume the atmosphere.

For those wanting to stay overnight, the Gran Piedra Hotel has 17 cabains and 5 bungalows. From this base camp, tourists can enjoy hiking, mountaineering and cycle-tourism activities while contemplating the generosity of nature.