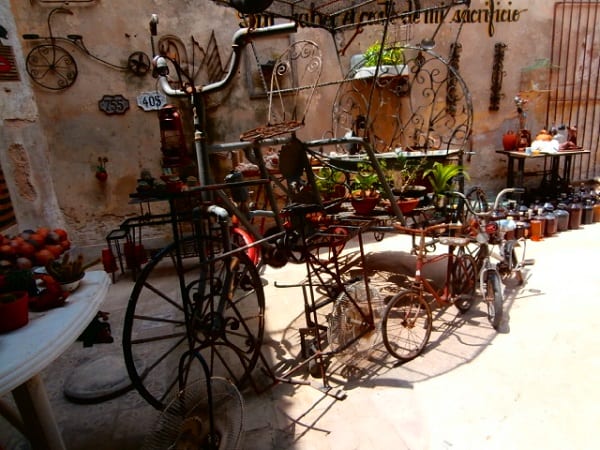 HAVANA TIMES – Today, I want to tell you about something curious, which is happening in the City of Central Havana, on Belascoain street near the Malecon seawall.

Its a community art and antiques project, that also has iron bars that are salvaged from collapsed buildings, slabs and tiles to name a few of the objects on display.

However, the thing that really caught my attention and filled me with admiration was a self-taught sculptor who started playing around with iron to make a living, two years ago, with the materials that were left over from his blacksmiths job. He began to make sculptures inspired by life in Havana and the customs of its people.

He is called Ricardo Gomez and he has admirable and never-ending desires to work. He is friendly and helpful, like every fine Cuban.

For example, one of his pieces is a large-scale Bicitaxi and you can see pans, coffee pots, and even where the driver sleeps a siesta, because he himself says that it was a tribute to the lads that come from the country’s interior to work, to earn some money and send it back to their families to help them out.

As they have nowhere to live, they normally live in their “House/Bicitaxi”. Another piece is the “Thin-legged Rooster”, as he calls it, because there aren’t any roosters with thick legs any more, which is a very old metaphor here in Cuba where the rooster is the king of the chicken house like man is at home. However, things aren’t like this so much anymore, as women have made them weaker because they have become stronger than men and they now have the thick legs… we have to wait for him to make a “Thick-legged Chicken”.  There is also a bat, which is the symbol of the Bacardi building, which is three meters tall and a two-meter tall Christ, as well as very sweet baby strollers.

They are building a bar using old materials, so that visitors can have a cool drink in this suffocating summer heat we are experiencing or a coffee, whatever you prefer, and refresh your gaze with works of art and maybe even buy an antique or sitting chair to sit in at home and relax. All of the staff and workers there are extremely kind to customers and that’s what I myself experienced.

2 thoughts on “Things that are also Happening in Havana”