HAVANA TIMES — I really didn’t have any desire to go out, but curiosity got the better of me, and since the subway is free on May Day, I went to see how they celebrate “Workers Day” here in Caracas.

It was announced that the “opposition” march would start from some point at Chacaito Avenue and head to Urdaneta Avenue (about four metro stops away), while the official May Day March would proceed from East Park to O ‘Leary Plaza.

That’s too much, I said to myself, more than six miles – sounding more like a marathon. But the truth was that the “red” march — spreading blocks on end — was much more striking given the number of people.

Different from Cuba, here people don’t march waving little flags in front of a distant leader standing on a podium. 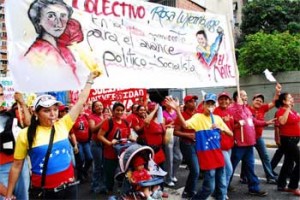 There are no “cordons” preventing the marchers from getting out of the street and deviating onto the sidewalk. And everyone was participating because they wanted to — however they wised — with some on motorcycles, others on bicycles, some with people from their jobs or alongside strangers.

The previous day they had passed the new Labor Act. While the “opposition” marched against that new law, the “red” march was in support of it.

The new legislation provides for double pay to workers who are unfairly fired, the elimination of labor recruitment through third parties, and the extension of maternity leave to six months, among others new benefits.

There were no points where the two marches would meet – a good idea.

While many workers did walk with drums and flags, others seized the opportunity to sell food and souvenirs and earn a little money, which — in the end — is what it takes to survive in any system.

One thought on “Workers’ Day in Caracas”