HAVANA TIMES – Shrieks could be heard from inside an 1864 tomb in the Colón Cemetery. The tomb is covered with weeds and the marble has cracked due to time and a plant, which took root at the bottom and broke everything in its path until it was free. Through the open spaces, an empty coffin, extracted in some exhumation, was brought in, along with who knows how many other things. Risita must have also entered through one of those holes; feeling protected enough by the thicket, the wooden box and the pieces of marble, to give birth away from public view.

Gabriela Orihuela and Marina Álvarez had been attentive to any clues from the burrow since they saw Risita’s swollen teats. One day, they found the cubs outside and were able to capture one. The next day, faced with the threat of gray clouds turning into downpours and flooding the tomb, Marina went in and took out the other two. She says that there were mosquitoes, santanilla ants and terrible humidity inside.

Sultana, Jeannette and Rachel, named by their protectors, had to be dewormed, but they are in good physical shape, awaiting responsible adoption. Their mother, Risita, is one of about 15 dogs that live in the cemetery today. Most are sociable and can be found in the vicinity of the main entrance. Others walk among the most intricate rows of tombs in small groups and do not allow any human to approach them. They all eat once a day and have had veterinary care since Maria took them under her wing about a decade ago.

Just under ten years ago —no one remembers the exact date—, another dog from the cemetery, just like Risita, found a nook to give birth to her litter. And like Risita, she had three puppies, but they had the bad luck of not being found in time and being born in what turned out to be a nest of rats, animals that eat anything; including puppies. A few blocks from the “Colon” is María del Carmen Castro’s small ground floor apartment. The first room, not very large, is a living room, kitchen, and dining room. It has some old equipment, chairs of different types and a wooden table. In the background is her poorly lit bedroom and to one side, a small corridor without a roof that serves as an interior patio.

Maria is 84 years old and very small, and her aging, curved spine makes her look even smaller. She negotiates the ups and downs of the sidewalk and the puddles of the corner manhole with a confused agility: she seems to be able to overcome everything without problems and, at the same time, it’s as if she might fall at any moment. It would not be the first time.

As soon as she approaches the apartment, even as she is still on the street, they smell her and the barking begins. The door has a hole close to the floor and her roommates take turns sticking their heads out to greet her. They are not used to visitors, so if she shows up with someone, they bark twice as much. They also run and climb on or hide under furniture. There are animals above and below each piece of furniture.

“This one was abandoned right outside, little guy, and I picked him up. I saw him sick in the street and so I brought him in. I felt so sorry for him. I have had this other one almost since she was born, she is my girl…”.  María tells everyone’s story – they are almost always related to abandonment or illness. She lives with fourteen dogs and one cat. That’s why a neighbor, a cemetery worker, thought of her at one point and called her.

“María,” he said to her, “can you come and take care of some puppies that are all eaten?” “What do you mean, eaten?”

She was surprised, but as soon as he explained it to her, she went out to look for them. “Getting them out was a dilemma. It was a lot of work, because they were hiding and fleeing. When I was able to catch them”— here María makes a dramatic pause — “their tails and hind legs were raw. The rats had eaten off their skin.”

She took them to a nearby vet who managed to save them, and put them up for adoption. She returned home happy to have that taken care of, and soon after she received another call from the cemetery.  This time it was an epidemic of scabies.

All the dogs had been infested. They were hairless, with irritated skin, scratching compulsively. Some, in a more advanced stage of the disease, could barely walk. María says that the Ceda group (Cubans in Defense of Animals) provided her with the medicines she used to cure most of the animals. “Two died,” María laments, “because they were very ill, with serious scabies. They had it in their blood.” She fulfilled her mission to save those cemetery dogs, and shortly after that, she would receive the third and last call. This time they asked her if she could feed them because they had nothing to eat.

Elisa Rivas, 76, tries to climb to the top of the cemetery cistern. She has to climb a cement square that is as high as her hips. She kneels on the rise, grips the wall of the cistern, and makes one last effort to get to her feet. She wears, as always, a scarf around her head, with her gray bun falling behind. She wears a blouse with Che Guevara’s signature badge sewn on the pocket. Once she’s recovered from the climb and shaken her knees out a bit, she opens the cistern, rinses out the dogs’ can, and fills it with clean water.

It’s time to go down. She sets the can aside and again sinks her knees into the concrete, plants her feet, one by one, on the ground, and carries the can over to one of the trees at the entrance.

Later, Marina will come with bottles of clean water to fill the same can more easily, but Elisa, if she arrives first, insists on doing it.

“About six or seven years ago, I came to take some photographs and I found María here with the dogs,” says Elisa. Since I live nearby, I saw her several times. I approached her, asked her what she was doing and, since then, I began to accompany her”.

Before retiring, Elisa was a film director, mostly of animated films. She remembers having made an animation of the song “Perro Sausage”, by María Elena Walsh, some documentary tapes on the care of flora and fauna and the film Looking for a friend, about a girl who wanted a pet.  She was hoping for a lion, elephant or giraffe, while an abandoned puppy tried to win her affection.

Elisa walks around with a bit of sweet potato in a bowl for a particular dog, who has a skin disease and has lost most of her hair, but she waits for Marina to come before feeding her. Meanwhile, she sits on a bench, next to Maria, to talk and pet the dogs, which come up to them and hold still while they receive their pampering.

“I came with her every day,” Elisa says about Maria, “and sometimes I gave her some money or food, but very little. The truth is that she spent years alone getting all the food and cooking it for the dogs at home. I don’t know how she did it.”

“Before, sometimes the Aniplant group sold meat and I would buy from them,” Maria explains. That no longer exists. She was looking for food: sweet potato, squash, malanga, everything except yucca and potatoes, which they can’t eat. There are also many people who know me and save chicken bones for me, which I put in the pressure cooker, soften up and then crush them to make a paste for the dogs.  And the rice I got from my ration quota was for them. My husband and I just ate the other food. He helped me a lot. He passed away recently. Now I’m alone in the apartment and, to be honest, I have too many dogs, but imagine, I feel sorry every time I see one around…”

“That’s how it went for I don’t know how many years,” Elisa returns, “until Marina began to take over.”

“Yes,” María interrupts her, “it was at the beginning of the pandemic. I caught COVID-19 and I was very ill. It attacked my lungs. I was hospitalized for weeks, with an IV, and Marina took over, because who was going to give food to these poor little animals. I appreciate it. I am no longer as young as when I started.”

A few weeks ago, María went to open her apartment door and ended up on the floor. She had been having dizzy spells for days and had them until several days after the accident. She hadn’t been to the cemetery since then, until today.

Around half past four, like every day, Marina arrives. Today she comes alone. Sometimes Gabriela accompanies her; sometimes other animal protectors, like Gilda Arencibia, who a few days ago ran —literally— after Negro, one of the dogs, to inject him and treat an eye infection.

Marina begins to undo her bundle. It has a metal cart with plastic plates, bottles and a large bucket. She serves food in the dishes and spreads them out so that each dog can reach one. She knows them all: Shakira, La Niña, El Cojito, Negro, la Jimagua… If one of them doesn’t show up, she looks for them nearby, as they simply may not have noticed her presence.

In that case, she lures the missing one to where the others are, and food is served.  But the cemetery, despite being a free – even happy — space for dogs, offers them very little protection. Every once in a while, one of them simply disappears, is run over by one of the cars and trucks entering and leaving the premises or leaves the cemetery and meets with an accident, like El Cojito, who lost a leg when he collided with a motorcycle on Calzada Avenue.

Marina has seven dogs at home “and one that is just stuck to me,” she says. In addition, she offers her home as a place of transit for pets that are awaiting adoption. Risita’s daughters are taken care of by her. She receives donations from time to time for the cemetery dogs, like the one of minced viscera, bones and meat broth, which she recently posted on her Facebook profile.

However, the main weight falls on the few people who feed the pets in the cemetery and especially on her. When all the dogs near the entrance have eaten, Marina follows the same route, together with Elisa, to the Central Ossuary, where there are dogs they call Los Jibaritos, because it is impossible to approach them. For those dogs, they simply leave the plates, move away, and wait for them to finish eating before they pick up the containers. If they are sick, practically the only way to cure them is to put the medicine in their food. After having fed and seen —albeit from afar— all the dogs in the area, the protectors return to the Calzada entrance and go to their respective homes. At that time, the cemetery gates are closed to the public.

The custodians only open the gate for them, the animal protectors who, in turn, protect them on their night watches. 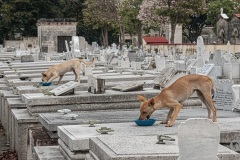 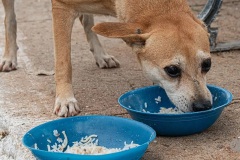 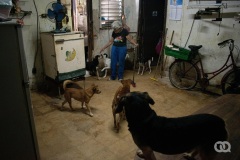 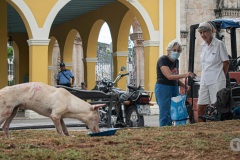 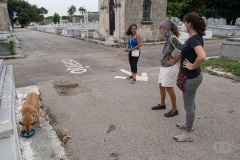 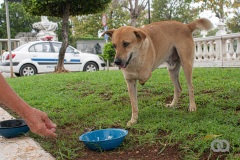 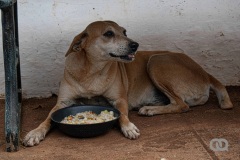 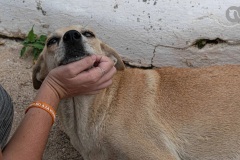 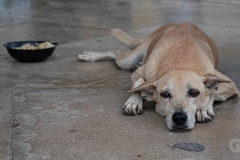 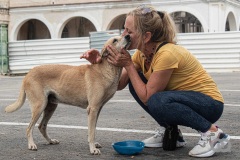 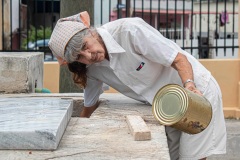 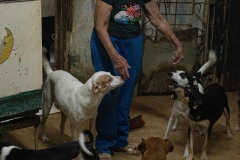 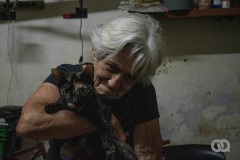 One thought on “The Havana Cemetery Dogs and their Caretakers”