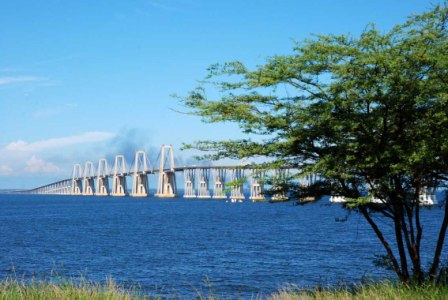 HAVANA TIMES, Sept. 5 — Residents of Maracaibo, Venezuela feel pride in three things: their lake, the bridge and “La Chinita.” Recently I toured around the enormous lake and crossed the astonishing bridge. Never in my life have I seen such a monumental feat of construction engineering.

The lake is easy to confuse with the sea, not only because of its size, but also for its high level of salinity. During the day I wasn’t able to make it to the great church of the Virgin of Chiquinquira (“La Chinita”), the patron saint of Maracaibo, but late at night I was at its feet.

Nonetheless, I couldn’t enter that shrine where a few centuries earlier there had existed the house of a launderette who —according to legend— found a wooden tablet with the image of Virgin Mary on it.

A pelican was the first to welcome us as we passed over the bridge. At once we also felt the heat, very similar to that which has been baking Cuba for the past few months. However, it’s not only the heat that Maracaibo has in common with Cuba: Its people are the most sociable of all those I’ve met in Venezuela; its houses seem a lot like those that are built along beach areas in Cuba; and the lake —always disguised as a sea— is the perennial center of attention of maracuchos (Maracaibo residents).

An additional love of the locals is “gaita,” a musical genre native to Zulia (the state in which Maracaibo is located), in which they sing about everything from love to religious figures, jokes and political accusations; although this style is most recognized as a form of Christmas music.

This is the only area of Venezuela where people use the informal Spanish pronoun “vos,” which is to say they speak very similarly to Argentineans. Also like many Argentineans, they usually feel they possess the greatest virtues (a while ago they put a lot of energy into trying to separate their state from the rest of Venezuela). They are interesting people, without a doubt, and it would be worthwhile to get to know them better and spend more time with them.

One thought on “Three Loves of Maracaibo”