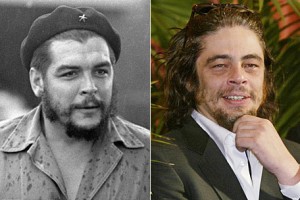 —Puerto Rican born actor Benicio del Toro dropped out of collage to study acting in Los Angeles and at the Circle in the Square Theater School in New York. After several stints on TV programs, short series and video clips he edged towards his film debut in Big Top Pee-wee. After being the youngest actor at 21 in a James Bond film (Licence to Kill) he then acted in films including The Indian Runner (1991), China Moon (1993) and Fearless (1993).

His film career picked up steam in 1995 with his performance in The Usual Suspects and a year later in The Funeral and Basquiat both in 1996. Benicio then acted in the Fear and Loathing in Las Vegas (1998) and in 2001, his role in Steven Soderbergh’s Traffic earned him his first Oscar for Best Supporting Actor.

Del Toro once again was in limelight under the direction of Soderbergh by winning the Best Actor award for his role as “Che” in the two-part film The Argentine and Guerilla at the 2008 Cannes Film Festival.