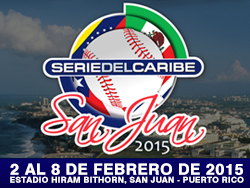 Cuba, represented by Villa Clara, returned as a guest to the series last year after a half century absence and finished last with a 1-3 record.

The teams are allowed to reinforce their squads with other players in their leagues and this year Cuba has 16 players from around the league plus 12 from last seasons champs, Pinar del Rio, the team representing the island.  Mexico is represented by the Tomateros de Culiacan.

To watch the game live: http://www.cubaportal.org/paginas/cubavision.aspx

Editors Note: Cuba lost its opening game to Mexico by a score of 2-1.  The Cubans next game is on Wednesday against host Puerto Rico at 6:30 EST.