Cuba’s international supremacy was painstakingly built over a full half-century of dominance in top-level Olympic-style tournaments. It was also often open to much skepticism (mainly the charge that the Cubans won world titles by hammering inferior collegiate squads and not big league pros) and somewhat difficult to measure.

The long-overdue IBAF rankings launched this past January have now thankfully provided a clearer measure of Cuba’s long-assumed but rarely quantified domination of international tournaments at both the junior and senior levels. Since the Cuban dominance was built brick by brick over a full five decades, it will take far more that a single tournament stumble to dismantle it. That is the primary conclusion to be lifted from the latest IBAF rankings released in the wake of a second World Baseball Classic.

A delightful twist to the latest rankings is the fact that while numerous USA writers jumped all over the story of two difficult Cuban losses in San Diego to eventual WBC champion Japan-prematurely citing those games as evidence that Cuba’s dynasty had ended and that the search was on for a new world baseball power (was it Venezuela? Team USA? Korea?)-little or nothing has reached American newspapers about this latest IBAF poll which has Cuba still clinging to the cherished top slot.

Ironically it was Team USA-despite the American’s weaker WBC pool and their eventual short-lived appearance in the semifinals-that slipped appreciably in the new international standings.

Four countries made significant moves up or down the ladder in the latest IBAF rankings. The United States tumbled three slots from second to fourth and now has to score some significant international tournament victories in order to retake momentum against the rival Asian powerhouses.

Venezuela climbed four notches from fifteenth position to number eleven, but this may be something of an aberration. Venezuela rarely enters competitive teams in any major events other than the WBC, since all the nation’s top athletes are now performing for organized baseball in the United States.

Panama slid from ninth to twelfth after its two quick WBC losses in San Juan, while Australia, Venezuela and Puerto Rico were all posting multiple victories on the WBC stage. Nicaragua, without a WBC entrant, also experienced the same three-slot drop-off, from number twelve to number fifteen. 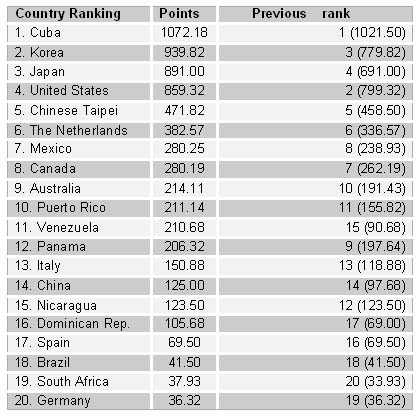 The next two IBAF standings will be announced this coming summer and fall, immediately before and immediately after the scheduled September World Cup in Europe. In those next two rankings we can expect Cuba and Korea to further solidify their respective grips on the two top slots.

Neither Japan nor the Americans will send crack teams stuffed with major leaguers to European venues in September, since this year’s World Cup play (unlike the November 2007 matches in Taipei) falls during the stretch run of both the major league and Japanese league seasons.

The remaining 20-team field will thus be left wide-open for the increasingly strong Koreans and revenge-minded Cubans. Even a Korean championship will not dislodge the Cubans from the top slot if the islanders can manage either a silver or bronze medal finish. Clearly the position of Cuba as the dominant world power seems destined to last for at least another year and quite likely well beyond.

The IBAF poll is the first attempt to establish relative rankings of the nation’s baseball playing countries based on measurable on-field performance at various levels of international competition. The system, developed in conjunction with Harding (Arkansas) University SID Scott Goode, assigns point totals to countries for each IBAF-sanctioned event at the junior and senior levels (including the women’s world cup matches).

The point totals are 50 for first, 40 for second, 30 for third and 15 for fourth. After fourth place, points are divided evenly among other finishers to assure balance between tournaments featuring vastly different-sized fields. Points awarded for a country’s finishes are then multiplied by a strength factor designed to weigh properly the highest level events.

Other continental tournaments (like the Pan American Games or Central American Games) receive multipliers of anywhere between 1X and 0.25X, depending on how many teams (countries) from the current top ten rankings are entered.

While most of Cuba’s international dominance of the past half-century has involved the vaunted senior national team, the island nation has also displayed considerable strength throughout all other levels of junior and university international championships.

This new IBAF ranking system-while not any less flawed than any other imaginable objectified system-does provide a meaningful tool for concrete measurement of the relative strength of any given baseball playing nation.

It is through the IBAF rankings that Cuba’s recent 2000s-era domination of the international baseball scene-despite the recent entry of top big league pros into these events-to say nothing of its half-century mastery of top international tournaments versus amateur national squads-is now finally being more clearly validated by a truly balanced and objective system of quantification.

*Peter C. Bjarkman is the author of “A History of Cuban Baseball, 1864-2006.” His latest books entitled “Baseball’s Other Big Red Machine: The History of the Cuban National Team” and “Who’s Who in Cuban Baseball, 1962-2007”, will appear from McFarland & Company Publishers during the coming year. To read Bjarkman’s coverage of Team Cuba in the recently concluded World Baseball Classic II see his diary at: http://havanatimes.org/?p=5062

7 thoughts on “Cuba Still No.1 in Baseball”