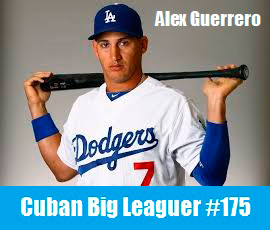 HAVANA TIMES — It was a most unlikely debut staged in a most unlikely venue, but with his brief appearance in the ninth inning of Saturday night’s big league season opener between the Los Angeles Dodgers and Arizona D-Backs, former Las Tunas shortstop Alex Guerrero entered the record books as the 175th Cuban native to appear in a major league uniform.

The odd debut carried rather exotic overtones since the former Cuban Leaguer became only the second among his countrymen to first taste big league action during a game staged away from North American soil – this time on the Sidney (Australia) Cricket Grounds recently revamped to host a historic two-game set that introduced big league baseball to fans in the Land Down Under.

Yoenis Céspedes also enjoy his own big league debut two seasons back (March 28, 2012) on far-distant Asian soil during a similar “traveling” MLB season opener staged between the Oakland A’s and Seattle Mariners at Japan’s Tokyo Dome. Céspedes doubled and stuck out twice during his own history-making lid-lifter as Cuban big league number 167. 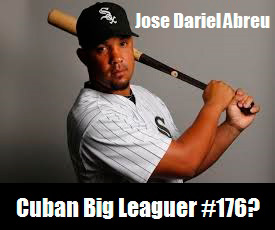 Guerrero’s own maiden appearance in a Dodger uniform was a rather unorthodox one for a second and more prominent reason since the Cuban managed to achieve “immortality” as an official big leaguer in a game where he never actually entered the field of play, while at the same time earning big league distinction by appearing in an official box score.

Having lost the tight battle for a starting second base slot to highly touted prospects Dee Gordon and Justin Turner (opening night starter at the position), Guerrero nonetheless was at least temporarily included in the club’s season-opening roster for the extended Australian road trip. He was called off the bench in the visitor’s ninth frame as an “announced” pinch hitter for LA reliever Brian Wilson, but when Arizona manager Kirk Gibson replaced lefty Oliver Perez with right-hander J.J. Putz, Guerrero was immediately recalled from the on-deck circle and replaced by lefty-swinging Mike Baxter, who promptly flied out to right field. Thus Guerrero’s current big league line shows one game appearance without any visits to the batter’s box, to the base paths, or to the defense infield alignment.

Alex Guerrero might well be headed toward a brief minor league apprenticeship when the Dodgers return stateside for their native-soil opening series with the San Diego Padres a week from this coming Tuesday. But it is almost certain that the Cuban roster of Major Leaguers will quickly expanding again in Chicago on March 31 with the much anticipated debut of slugger José Dariel Abreu, still currently penciled in as the White Sox opening day first baseman. 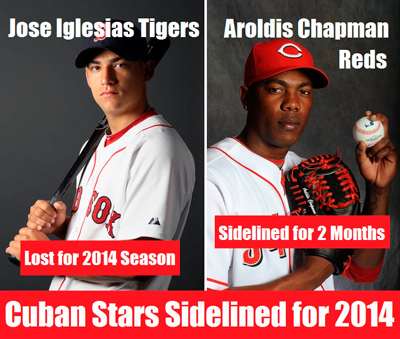 While the Cuban big league presence is likely to bloom extensively this summer, two recent headliners are now are least temporarily sidelined. It was announced early last week that multiple stress fractures in both legs will keep talented Detroit Tigers glove man José Iglesias out of action for the entire 2014 season. And a tragic accident Wednesday night in Surprise, Arizona, has now postponed 2014 action for Cincinnati flame-thrower Aroldis Chapman for at least several months.

Struck in the face by a line-drive off the bat of Kansas catcher Salvador Perez, Chapman received several facial fractures but fortunately escaped either life-threatening or career-ending injury. After successful surgery on Thursday which included insertion of a steel plate in the pitcher’s forehead, it was announced by the Reds that their ace closer might resume throwing from the mound in as little as six weeks but would not likely see season regularly action with the parent club until early or mid-June.

League or in the post-revolution National Series (are Cubans by birth but not by baseball training).

Note: 39 Cubans in MLB (out of 176) earlier played in the post-revolution Cuban National Series