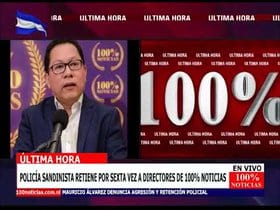 HAVANA TIMES – The Nicaraguan Institute of Telecommunications and Postal Services (Telcor) has ordered cell phone operators to take the 100% Noticias television channel off the satellite signal. Weeks ago, it had already ordered the removal of the station from the UHF signal, installing a new State channel.

Through an order from its Legal Department, Telcor told the cell phone operators that “since the channel 100% Noticias is retransmitted through your technology without the prior authorization of the regulator, you are requested to withdraw the 100% Noticias channel from your satellite television system, while technical studies are concluded.”

According to Telcor, satellite television operators need their authorization to include 100% Noticias in their programming.

At the end of October, Telcor had already ordered to retransmit the programming of the government’s channel 6 on channel 15, the relay of 100% Noticias. An action that the director of 100% Noticias, Miguel Mora, said “aims to besiege and violate the freedom of the press.”

“I see it as an act of waste and revenge. They are doing absolutely nothing but flaunting themselves. They act in phases, first the massacre and now they go for the media,” said Mora.

That first order came through a communiqué issued by Telcor on October 27 and signed by Orlando Castillo, general director of this institution. It dictates: “Channel 15 on UHF belongs to the State and is managed by Telcor, which has not has granted it to any individual or legal entity. It is the obligation of the subscription television operators to include all national, analogue and digital channels in their programming.”

Since Saturday, November 26, Mora and his wife, journalist Verónica Chavez, have been subjected to several death threats by police officers, who have detained them in their vehicle to warn them: “Your days are numbered.”

Mora reported that the latest event occurred on Friday evening when he was traveling home with his wife. After being stopped, “They made me take off my shoes, I gave Veronica my wallet, cell phone, glasses, keys to the truck, keys to the house … two or three officers pushed me away from the pick-up and took me to a police patrol car where there were some hooded [unidentified] people,” said the journalist.

“They locked the door, they put a ski jacket on me. I was barefoot. A policeman who was there with a ski mask told me: ‘Stop fucking around, you are the culprit of the police deaths, if you continue causing trouble, we will go against you and all your family. Do you think we’re going to continue to put up with you,” the news anchor was warned.

Attacks and threats since April

In April, after independent media coverage of citizen protests against Social Security reforms, the government ordered Telcor to remove 100% Noticias, Channel 12, Channel 23, Telenorte and channel 51 from the television space.

At the time Miguel Mora, described the action as a “serious error” to censor several cable television channels, including his, when they were removed from the air for no reason.

“Officially nothing was said (to get us off the air), but off-the-record we were advised that in light of the atmosphere of confrontations, marches and counter-marches, we should not broadcast news or give coverage. In addition, we were asked to suspend several independent talk programs from our programming for allegedly inciting violence,” denounced Mora.

The programs that they asked to remove from the air of the television channel were the talk shows “Jaime Arellano in the nation” and “Cafe con voz”.  Mora said the petition was raised during a meeting with Telcor director Orlando Castillo, who told him it was a request from President Ortega.

Mora insists that he told Castillo that they could not violate press freedom “because we owe it to the citizens who watch us.” In response his signal remained off the air for several days.