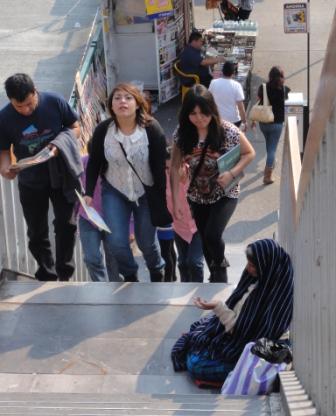 I arrived in Mexico on the 26th of July last year. I left the “homeland” on its “Day of National Rebelliousness” (a day that celebrates suicide) by chance, because of the price of the ticket. Saying goodbye to Cuba with a symbolic gesture I could later boast of before new friends was not my intention. I simply wanted to say goodbye to Cuba.

I wanted to get away from toilet paper shortages, the lines of people buying eggs, the coffee mixed with roasted chick peas, State Security, the office I had spent the last year of my social service in, the heat.

I didn’t get to hear the “historical speech” usually delivered that day.

Minutes before boarding the plane, I had finally understood that leaving the island is a silent process, that this business of not wanting “to talk about the trip, so it doesn’t fall through” has more to do with how surreal everything feels than with superstition.

I’ve spent weeks feeling that one of Havana’s city buses is going to come up Monte street and stop in front of the Capitolio building. One continues to live in Havana for a long time after leaving it behind.

It’s cold in Mexico City even at the close of July. I still haven’t been able to answer half of the questions I asked myself that day. Why can’t I understand their Spanish? Why are there so many white blonde people in ads and commercials? Why is everyone eating all the time? Why are people constantly thanking you?

Getting on the subway was my first joy. I had often dreamt of one that would connect Havana’s Alamar to Vedado, eliminating the need for the crowded P11 bus in the process. The subway, the efficiency of Third World capitalism in all its glory, was also where I first felt fear and disgust outside of Cuba.

Mexico City’s subway system is a parade of beggars and street vendors. The blind musicians, the “refreshing” gum, the barefoot native children, the looks of contempt and an oft-repeated phrase: “Excuse me for bothering you…”

There, I was definitely no longer in Havana. Cuban beggars look you in the eye, defy you, almost tear the money from your hands, insisting you give them something. The person who asks for a “bit of help” in Mexico apologizes. Whoever is forced to do so in Cuba lays the blame on you.

My first day in Mexico City pitted Latin American capitalism against totalitarian “socialism.” I couldn’t help the feeling that the violence of the homeless in Havana is a symptom of social health. In Cuba, poverty is, up to certain point, identified as the outcome of a failed project. In Mexico, it is seen as inevitable.

“Fidel was right about poverty in Latin America!” I heard someone say in my head. I left the metro at 10 at night, delirious. After the half-hour journey, the world-famous cathedral and Zocalo looked to me like pathetic tourist postcards.