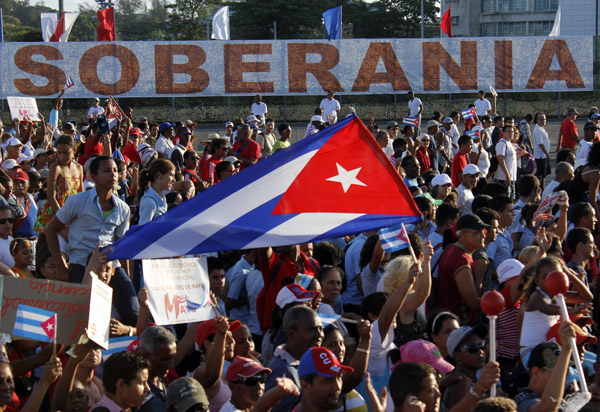 Cubans are inclined to “automatism” (unconscious, involuntary action).  Yet, at the same time, they reflect a contrasting attitude as their complaints and expressions seem to renounce the culture of pandemic slogans and revolutionary pamphleteering that has characterized the campaigns of the Cuban Revolution since its beginning.

Given these two opposing tendencies, I can’t understand how they go to marches — like robots — hoisting their banners and waving their flags.  No one told me about this, I saw it with my own eyes.  I admit that up until today I always believed that the reports by journalists citing the numbers of people attending these parades were exaggerated.

I refused to believe that at this point — after so many people have come to the conclusion that these practices are now worn-out and ineffective strategies — that these forms of mobilization (what V. E. Meyerhold* described as the “ostentatious exhibits of slogans”) could be the leitmotivs that lead us nowhere.

But at dawn on this past 1st of May, thousands of people headed out with their posters and banners in hand towards the Antonio Maceo Plaza of the Revolution in the city of Santiago de Cuba.

Many were compelled by atavistic instincts, while others went out of fear being put on the list of non-attendees, a status that can rebound on one’s job security.  But both groups came voluntarily, a will that can be translated as responding to punitive forces, but that denotes individual conviction.

With their arms held high, waving flags, they loudly and clearly shouted phrases reaffirming that if the party or the revolution calls, the people will respond.  This was how the International Workers Day March took place in “the second city” of the island.

Various union locals exhibited their proletarian ranks, though if they hadn’t endorsed massive layoffs a few months earlier, their representation would have been much more pronounced in this march.  This parade was opposed to what it should have been: a march of the masses.

Is this an incoherent truth?  Now that there are fewer workers, more people turn out for the marches.  It has nothing to do with the fulfillment of Che’s directive: “Do more with less!”

Undoubtedly this is also a display of the double standards exercised in our society as a principle.  I would dare to bet that a high percentage of those who were present were moved less by ideology than by appearances.

Any feature or report on this action by the Cuban working class will supply undeniable exhibits to the world of unconditional support by its members, though anyone there could have heard expressions like:

“You have to show up and be counted.”

“You gotta go.  You can’t afford to look for problems on the pincha (job)!

“The job situation is bad, you can’t jeopardize yours for not participating in a march.”

Contrasting with their daily complaints and expressions that curse the culture of slogans and pamphleteering, a couple days ago the Cuban people — like robots — celebrated their May Day march of the masses.

* A great Russian theatre director, actor and theatrical producer who was tortured and executed by Stalin’s government (later cleared of all charges in 1955 during the first wave of de-Stalinization).