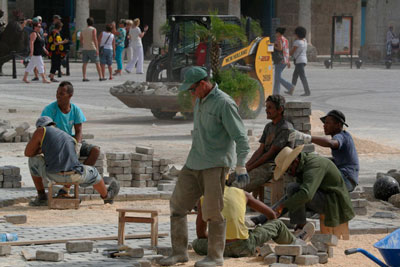 HAVANA TIMES — Workplace debates surrounding Cuba’s draft labor bill officially came to an end this past October 15th. Now, we are left with the question of what comes next.

The National Assembly of the People’s Power has a scheduled session (in Cuba, the parliament convenes for only a handful of days) for December. Then, we will finally get to see what comes out of this bill.

I would like to share some of my experiences debating this legislative proposal, having had the opportunity to participate in a number of very different discussions on this issue.

I have also been told by friends and through emails that very serious proposals have been made in this connection, as is the case of the workers of Havana’s Empresa de la Goma (rubber factory) and those advanced by activists from Socialismo Participativo y Democratico (“Participative and Democratic Socialism), Articulacion Regional de Afrodescendientes (“Regional Afro-Descendants Group”) and Alianza Unidad Racial (“Racial Unity Alliance”).

All of these debates and proposals add up to a highly interesting dynamic. In some places, one gets a sense of apathy bordering on feelings of powerlessness, indifference and cynicism in connection with “what’s coming”; in others, one catches sight of a sincere commitment towards the future of the Cuban people.

What I see is that a number of chapters in the draft labor bill pave the road towards a transition from a bureaucratic State-command economy to a form of private-enterprise capitalism where, to make matters worse, the employing class is furnished with more rights and opportunities than those who work for them.

Those of us who consider ourselves defenders of the rights that the workers have secured for themselves in the course of history have to ask ourselves what is to be done now. Specifically, we must develop a good strategy to involve the people in political and legal discussions so as to ensure these rights prevail.

Before addressing that, I would like to comment on a number of specific moments of the debate surrounding the bill, now that this stage of the process is coming to an end and a balance can be made.

The most recent information at my disposal regarding the formal procedures to be undertaken by official Cuban government institutions in connection with the draft bill is an interview with Ulises Guilarte, chair of the organizing commission of the 20th Congress of the Cuban Workers’ Association (CTC), published by Cuba’s Granma newspaper on the 18th of October.

The government official said that, as of November 12, following a new revision by experts, the legislative proposal will be passed on to regional deputies for review. After this, it will be submitted to parliament.

This affords us a new margin for intervention, where it ought to be possible for citizens to have some influence on what their respective regional deputies do. It is by no means an easy task, but I feel it is feasible to a certain extent.

One thought on “Cuba’s Draft Labor Bill and Me”