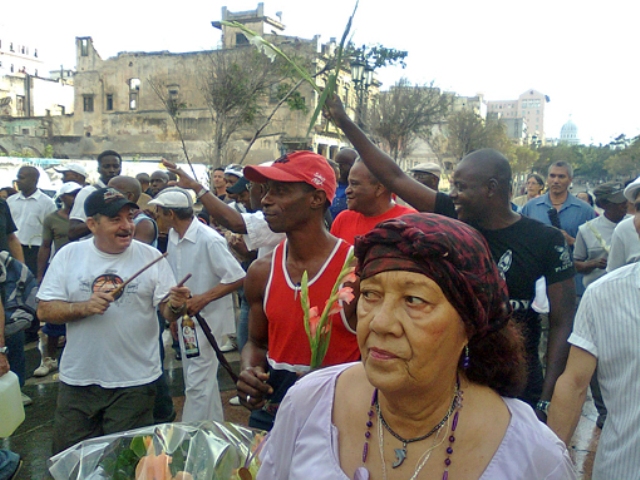 Perhaps not much time has gone by, but I again want to refer to the commemoration of the Day of Historical De-colonialization: November 27.  This date, which emerged “from below,” was originally an initiative of several Cuban citizens who were committed to history and to the country beginning to recall the anonymous black Cubans murdered by Spanish colonialists in 1871.  The men were killed at the time of the deaths of eight white medical students who are now considered the first Cuban university martyrs.

“Official history” has promoted the commemoration of the whites but ignored the blacks.  The reason is not so much racial as it is one of internal colonialism: the black martyrs and at least one of the white students belonged to the secret Abakua society, until recently considered to be a kind of marginal Mafioso-like network.

Thanks only to the work of older Abakua members, such as historian Tato Quiñones, has it been possible to reclaim the original values of that fraternity of men and to begin studying its contribution to the Cuban Revolution.

Today many teenagers join Abakua fraternities seeking prestige in the macho and marginal environment in which they are immersed.  In that atmosphere, important roles are played by posturing, guapera (the tough-guy image) and the capacity to commit violent acts.

The process of the ethical rescue of the traditions of Abakua have only begun, and it’s likely that the commemoration of November 27 each year will help to give many youth a new understanding of what it really means to be an ekobio (a recently initiated brother in that historical fraternity in which blacks as well as whites invoke their African ancestors).

In last year’s commemoration — among rhythms of drum rituals and the dances of iremes or devils (which represent the spirits of the ancestors) — for the first time, Abakua members and others marched to the Monument of the Medical Students, near the sprawling Castillo de la Punta colonial fortress.  It was in fact amid an armed protest of the murder of the students that the black Abakuas were killed in 1871.

Perhaps some have thought that so many ekobios together would be a source of rowdy and unruly conduct.  However — though we all enjoyed a drink of Cuban aguardiente amid the funeral liturgy (which for the Abakua is a ceremony that does not preclude joy and celebration) — there was no type of violence displayed.  Just the opposite, what prevailed was a type of cordiality that is increasingly rare these days in the streets of our Havana.

I want to highlight another essential point: the procession was escorted by officers from the Police, Traffic, and State Security.  But they too were cordial and peaceful in dealing with the marchers.  For public acts held on that day it’s not necessary to request permission from the authorities, since it’s considered a legitimate activity “from above.”  In fact, this time the uniformed and plain-clothed agents even helped police motorcyclists stop the traffic when the crowd crossed the streets.

I was pleased to see that they adopted such a stance.  As news has arrived recently about xenophobic conflict in Moscow — my other capital — it’s pleasing to know that in Havana it’s possible to peacefully commemorate such an event involving such “diversity” in contrast to other countries that claim to have achieved “ethnic integration.”

Let’s hope the forces of law and order as well as our civic activists maintain the attitude of cordiality and cooperation that was demonstrated in those actions of this past November 27.